The investment will supplement Euro Media Group’s existing fleet of Sony systems which includes the HDC-4800, HDC-4300 and HDC-2500 cameras as well as XVS series switchers. 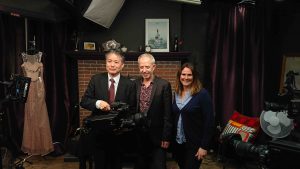 The HDC-3500 features what is claimed to be the world’s first 2/3-inch 4K CMOS sensor with global shutter technology, meaning it can deliver uncompromised image quality in 4K at low noise (-62dB), impressive sensitivity (F11 at 1080/50p) and High Dynamic Range (HDR).

Announced at NAB, the HDC-3500 will also support 4K Wireless operations by the addition of the HKC-WL50 exchangeable side panel.

With the same operational method as other HDR-capable Sony cameras, the HDC-3500 offers support for Sony’s SR Live for HDR workflow which allows simultaneous 4K HDR and HD SDR production by a single team – reducing hardware and personnel costs for the Group’s multi-format productions.

Following EBU’s Tech 3371 integration recommendation and full SMPTE ST2110 support, the HDC-3500 complements Euro Media Group’s clearly defined IP technology strategy to develop new concepts using remote integration (REMI) architecture to deploy across Europe by 2020. The company already has its first one planned in the Netherlands and is on air using other ST2110 compliant solutions from Sony, such as the HDCU-3100 camera control unit and the XVS-8000 video mixer.

Sony’s offering of service and training support together with the combination of native 4K acquisition and IP capability of the cameras can help Euro Media Group optimise ROI and enables reliable production across a variety of applications and environments, from studios to sports and entertainment.

“We need a reliable partner who provides a superb technology and also high-quality service support – these are the reasons why we’ve been working with Sony for many years,’’ said Ronald Meyvisch, chief technology officer at Euro Media Group.

“Investing in the HDC-3500, complementing our existing fleet of Sony solutions, will accelerate our ability to deliver any type and size of event in precise colour, contrast and detail. It will also enable us to take full advantage of IP for remote production, dynamic allocation of resources, and more.”