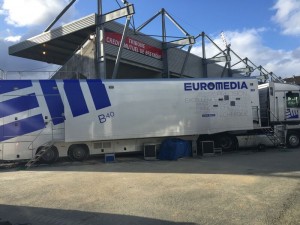 The combined effect of a year packed with exciting sporting events (the EUROs in France and the Olympic Games in Rio) and the rise in 4K coverage have prompted a number of leading European service providers to invest in new equipment – and Euromedia is no exception to the rule.

“We are progressing with the complete overhaul of our OB trucks which includes completely renovating the reception and work areas as well as installing next-generation equipment,” said Gaël Tanguy, technical director for the company.

The B40 is in a way the little brother of the A21 OB truck, which has been in use for a few months already. Slightly smaller and double-expanding (the A21 is a triple-expander), it does however incorporate many of the A21 features such as HD or 4K infrastructures.

“In addition to our desire to create the most innovative workflows and high-performance tools, we are also committed to streamlining work procedures across all the group’s OB units. Our goal is, of course, to ensure that all our technical crews and users can easily switch from one production truck to another,” continued the technical director.

Once again, as is the case for the A21 or C42, the production infrastructure consists of the Grass Valley mixer and a Snell Sirius router frame that includes a dual production space with two separate panels. The entire workflow operates in network mode. Each of the OB unit’s workstations can be easily and rapidly set up by the LSB VSM universal control system. Most of the monitors are by Sony OLED, whereas the remote workstations use EIZO monitors.

A Telex matrix was chosen for the intercom system and an Erica fibre transport system for optic fibre transmission to outside equipment. Finally, the Studer Vista 9 console is once again the audio choice for the group’s OB units.

As was announced just a few days ago, the Euro Media Group (EMG) has just signed a four-year agreement to expand its stock of broadcast cameras by investing massively in the Sony HDC-2500 and HDC-4300 models. The 3G capable A21 OB unit is able to mix up to 24 camera sources. Onboard there are also 12 positions for the remote LSM operators.

The technical specifications of this new OB unit make it particularly suitable for sports events. In fact, it made its inaugural debut at the Stade de France for the friendly match between France and Russia. The B40 provided Canal+ with the graphics for the private feed. It has also been deployed for a rugby match as well as the Guingan v PSG Ligue 1 Championship match.

For now, Euromedia is unable to announce its schedule for the upcoming European Cup. However, it is understood that the B40 could be used in unison with the A21 at the Stade de France, the showpiece ground where the semi-final and final matches of the tournament will be staged in June.