Formerly in charge of sports production at Canal+, François-Charles Bideaux is now co-CEO of Euro Media Group, alongside Patrick Van Den Berg. In this interview with SVG Europe, Bideaux considers EMG’s current approach to sports production and the impact of the latest innovations in camera technology and remote production.

Can you briefly outline some of the latest developments for the Group in terms of live production?

Live sports is a major activity for Euromedia. Our six subsidiaries and companies that specialise in some of the workflow processes are all involved in this activity. Today, UHD progress varies from country to country. For example, in Italy we produce all the Juventus home matches in 4K, i.e. around 19 matches per year.

Naturally, we pool our OB resources across several neighbouring countries and we plan to build and roll-out new units in the very near future. However, in addition to our high-end premium productions, the development of our activities also involves simplified live production for lower-tier sports with smaller budgets. Please note, though, that simplified production does not mean low-cost production! That is to say, we work with broadcasters’ editorial staff in order to rethink and set up a ‘lighter’ version of the broadcast infrastructure, but it must [still] guarantee top quality results.

As of now, we can come up with solutions to meet the needs of Federations that previously relied on local providers due to a lack of means. As an example, women’s football on Canal+, as well as lower and junior divisions, now benefit from these changes. We regularly use the solutions offered by Simpylive for our simplified productions.

Our long-standing RF expertise also continues to evolve along with world-class events like the Tour de France. For inner-city races where 4G coverage is generally good, we increasingly use these networks instead of the more complex and expensive RF wireless solutions.

Remote production is of course something that we have been working on for several years. Its development is linked to the fibre optic networks and operators in each country. In Italy our subsidiary 3Zero2 produces 1500 matches annually using remote technology for sports such as football, basketball, water polo and volleyball. However, IP production does not make much sense or even provide a cost-efficient advantage without a media centre that can offer a full range of services. Workflows need to be optimised with multi-device productions as well as by offering services to organisers and match officials [among others]. We can also offer OTT services as part of a media centre set-up, which is obviously more difficult when we have to move the entire means of production on-site.

What is the current state of play regarding graphics innovation? 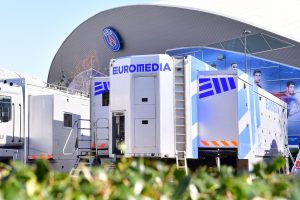 As far as sports graphics are concerned our subsidiary Netco Sports continues to develop its GPS geolocation systems. For the [latest edition of the] Tour de France, the 200 riders were equipped with GPS tracking devices that allowed for graphic integration of their exact positions and time-gaps during the race. This provided real added value for viewers.

Euro Media works with a number of companies specialising in the development of dedicated tools for sports coverage. What can you tell us about this?

DVS-Sport continues to focus largely on super slow-motion. Super-loupe cameras have been around for several years and have naturally evolved towards 4K production, but that is not all. Thanks to miniaturisation technology other mini-camera solutions like onboard and camera tracking systems are now available, and can be placed in locations including behind goalposts. The use of drones for taking aerial shots in super slow-motion is also developing rapidly.

As far as equipment and aerial shots are concerned, ACS (Aerial Camera Systems) is the leading provider of state-of-the-art equipment ranging from traditional heavy equipment, such as helicopters and drones, to other types of machinery, including camera tracking rails and wires. Once again, sports production has many needs that have to be met!