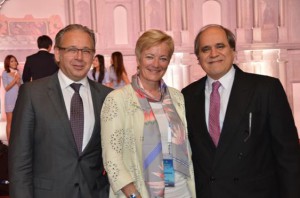 Leaders of the European Broadcasting Union (EBU) and the Asia-Pacific Broadcasting Union (ABU) have demanded global action to protect spectrum to guarantee the future of broadcasting. The call was made on the closing day of the 50th Anniversary Annual Assembly of the ABU (28 October) which was hosted in Macau by the public service broadcaster of the China Special Administrative Region Macau, Teledifusao de Macau, S.A.R. (TDM).

“Terrestrial broadcasting remains a crucial tool in emergency situations,” said Dr Mottaghi. “It is often the only technology which continues to function and can reach a mass audience despite difficult external conditions. Terrestrial television is the cornerstone of the broadcast industry and its survival is essential to the region’s people.”

With preparations well underway for the International Telecommunication Union (ITU) conference on spectrum WRC-15 administrations around the world are taking positions on the assignment of spectrum to different applications.

The broadcast industry has been working with administrations to illustrate the efficiency of modern DTT networks, the strong demand for DTT services, and the evidence that the spectrum assignments currently reserved for DTT should not change.