Creative Technology (CT) first became involved in professional golf over 30 years ago. Since then the company has built its relationship with the European Tour, providing AV technology at numerous tournaments throughout Europe, the Middle East and into Asia and Australia.

The CT team has now been appointed an Approved Supplier to the Tour in recognition of this long-term engagement.

The European Tour, headquartered at Wentworth in Surrey, manages all the premier golf tournaments across Europe and the Middle East. Alongside the numerous iconic events including the BMW PGA Championship and DP World Tour Championship, Dubai the European Tour also manage the Ryder Cup on its 4-yearly visit to Europe.

Dave Crump, CEO of CT in Europe & the Middle East commented, “Creative Technology has a long, proud and successful relationship with golf in Europe providing LED screens to around 40 events per year and having been involved in every European Ryder Cup since 1985.” 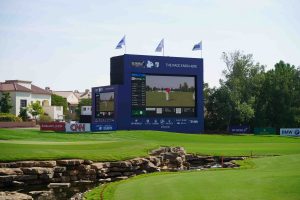 LED screens have historically been the focus of CT’s supply and whilst this continues there has been a significant shift in priority in recent years. Golf is one of the most challenging sports to support with large screen displays, typically played in full daylight and ideally bright sunlight means screen brightness and contrast is crucial, coupling this with a requirement to display high density graphical data and TV images which typically include a tiny white ball on a uniform green background means the selection of display technology is crucial.

This in turn creates more opportunities and consequently demand for bespoke graphical information in addition to the broadcast images and TV graphics.

CT’s package at every European Tournament now includes a sophisticated TV production and content solution integrating data from scoring and other sources with a combination of locally produced imagery interjected into the European Tour Productions World Feed.

Alongside a range of LED options customised on a tournament by tournament basis from a standard menu of services, CT also provides multiple LCD displays installed throughout the venues VIP and sponsor village environments all connected via a rugged IPTV network allowing customisable content on individual displays across the golf course.

Two identical technology packages leapfrog around Europe typically from April to October supported by a universal production package which travels to every tournament. During the European winter the focus moves to the Middle East and Asia where the same production package is linked to a more locally customised display solution often supplied and supported by CT’s local operations throughout the Middle East and Asia.

“CT’s technology is critical to the visualisation experience for our spectators at tournaments to create a more immersive environment, and I’m delighted they are on the journey with us to deliver our vision for a world-class connected and intelligent course,” said Michael Cole, European Tour chief technology officer.