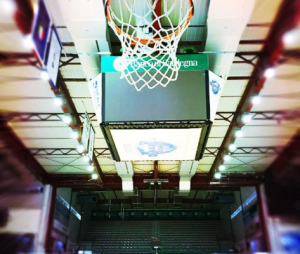 As part of the international Basketball Champions League – which is produced by FIBA – the Italian team Dinamo Basket Sassari played against AS Monaco in the Sassari sports hall on March 22. For events of this type, Euroscena usually alternates between two mobile vehicles – Unit 20 HD and Unit 22 HD – which are named according to the number of cameras onboard each.

The choice of which unit to employ often depends on viability and, in general, inspections are carried out before the event with regard to factors such as venue and road access.

Unit 22 is a long truck often used in Champions League football for the high number of cameras, but on this occasion Unit 20 was chosen. The cameras in the game, all by Grass Valley, were therefore a maximum of 20, but this time nine were positioned according to requirements. The 1 and 2 units were the ‘main cameras’ and placed on the stands; the camera 1 took the game with a wider field, while the second took care of shooting the game with a narrower frame that tends to favour details.

It was decided to use shooting tripods rather than rolling towers to ensure an even greater stability in the images as well as general security. Then three mobile cameras were shoulder-operated: one shot from mid-court, and two others placed just below the baskets.

Manuel Lombardini, technical manager of Euroscena, comments: “The shoulder cameras are much used in basketball to give more immediacy to the images, but also because in many situations the public come very close to the playing field itself and therefore space problems are frequent. However, the choice is always artistic and it is always the director who prefers shoulder shots because the action in basketball is very fast.

“Any other camera on tripods could never be tilted fast enough to the basket, risking [the loss of] important moments of the game. It’s all in the immediacy, and the reaction speed is crucial.”

Camera 6 is a ‘beauty’ camera which returns images from the total field. The 7 is a camera that frames the main board of seconds, which in basketball is very important, as well as the score. A local graphics timer takes care of this, but in case of a crash of camera 7 such images become very important.

Another two cameras, Netcams, are installed just behind the boards and the baskets, remotely controlled, and are the same as those used in the back of the goal. All cameras generate video signals that are transported via triax apart from the latter two, where signals travel via fiber up to the mobile gallery.

The main truck provides slow motion functionality and EVS servers, with 12 channels divided 8 in and 4 out. It records all cameras in continuous mode, which graphics are also recorded since FIBA wants complete programme copies as well as the camera 1 feed with inserted graphics. A single main feed programme and backup with international signal is distributed.

An EVS XFile machine is network interfaced to the EVS, allowing transcoded data recordings to be output on USB sticks in H264 at the end of the match. In addition to the USB sticks, some solid state hard disk drives containing MXF files are also supplied post-match.