Avelo, a Dutch production company led by cycling enthusiast and former TV producer, Flavio Pasquino, was tasked with producing the live coverage of the Tacx Pro Classic cycling race for Eurosport and Omroep Zeeland. The broadcasters requested a full HD production, with the same look and feel and production value as the Tour de France for a much smaller budget. 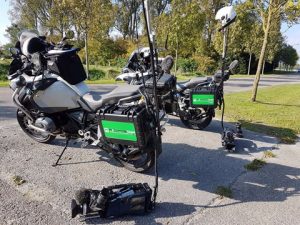 Pasquino had experience of producing live cycling programmes. He decided to use mobile encoders with 3G and 4G modems on motorbikes to transmit HD pictures to an OB vans, omitting the need for expensive RF technology which is still commonly used for this type of productions.

The tech mix used by Avelo is key to its success, commented Pasquino, founder and producer at Avelo: “Our tech allows for much lower production costs. For transmission you don’t need skilled RF-technicians, auto-pointing antennas, and sometimes even an airplane as a relay point. All transmission takes place over general internet connectivity; 3G/4G for the mobile encoders, fixed internet lines, but without QOS for the decoders at the OB truck.”

Belgian Motomediateam, a small company led by Dirk Van Laer who specialises in providing the bikes, camera’s, stabilised lenses, and also the drivers and specialised camera operators for live coverage of sports from motorbikes, quads, drones, was called in. The company relies heavily rely on Mobile Viewpoint’s WMT line of mobile encoders. 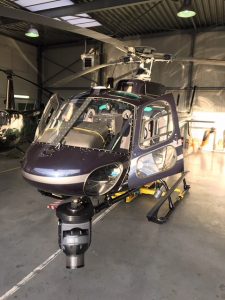 Van Laer explained his company’s choice of Mobile Viewpoint technology: “For years we’ve been covering cycling races, purely to produce after movies. Three years ago we started covering races with one Mobile Viewpoint WMT encoder on a motorbike. By now we have four and cover about 20 races a year live. These units withstand all the vibrations, dust, heat and overall abuse during such races, while still delivering best in class HD live pictures. By now we’re experienced like no other in using these units. We’re broadcasting live from motorbikes, quads and even helicopters. Without these units we never could have expanded our business into live broadcasting.”

For this race it was decided that the Belgian Motomediateam would deploy two motorbikes, each one equipped with a Mobile Viewpoint WMT LiveLink encoder, transmitting H265 encoded HD video over eight LTE modems and the public internet to the OB truck at the finish line. A third LiveLink H265 encoder, also with eight SIM cards, was installed inside a helicopter; a Cineflex gyro-stabilised camera mounted outside was used to shoot ultra-stable video from 300 metres up in the air.

The biggest challenges are to attach the 3G and 4G dome antenna to the helicopter’s exterior, noted Pasquino. “It needs to be securely attached, and in the upright position. That’s always a challenge,” he stated. “Another challenge is to have enough power inside the helicopter. Power is shared with a lot of other TV and camera equipment. And the last challenge, always, is to have good internet at the OB van. This time the truck was in the middle of nowhere; internet came in from about a mile away, over a point-to-point RF connection.” 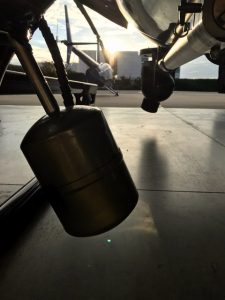 Pasquino continued: “For the Tacx Pro Classic I very much liked working with Moto Media Team and their Mobile Viewpoint WMT encoders. They have thorough experience with this technology and during a test-run, it proved to be able to deliver live coverage without any drops.

“The production itself went by without any issues,” added Pasquino. “The cost savings by using this technology versus classic RF links are also tremendous. Without the Mobile Viewpoint technology, I wouldn’t have been able to produce broadcasts like these.”

Since this whole production was centred around receiving all the video feeds over the public internet, the internet connection at the OB truck had to be good and could only be used for live images. However, this proved to be a challenge since the nearest internet connection was over a mile away. Finally an RF link was deployed to provide the necessary internet bandwidth at the OB truck.

Moto Media Team’s inhouse Mobile Viewpoint WMT specialist took care of all the preparations and worked with the OB truck provider, Facility House, and local internet provider to ensure everything would work together. Since much of what was required could be prepared before production day, it was a mere ‘plug and play’ job on race day.

It took around two hours to install the WMT Playouts for HD SDI decoding. In tests feeds from bikes came in picture-perfect, and after some tweaking the IFB over WMT came through crystal-clear.

By the time the Paris-based Eurosport master control room put the production company to air, all members of the team were confident of the success of the project. When the first pictures from the helicopter came in, while taking off 150km away, a sigh of relief was heard. With award winning cycling TV director Martijn Lindenberg in control of the production, everything went well, said Pasquino, and clients were pleased with their content.