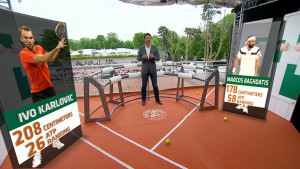 The Ross XPression platform now powers all of Eurosport’s graphics content across 54 countries in 20 different languages. This year’s tennis coverage from the Roland Garros stadium in Paris has a slightly different look and feel, and Eurosport has been taking advantage of XPression’s 3D and augmented reality capabilities to create some creative and eye-catching content that complements the live tennis.

‘The Coach’ – a twice-daily segment in both English and French where a top tennis coach analyses the playing style of one of the day’s competitors – has drawn praise for its use of innovative on-screen graphics that blend with the physical set. Commenting on XPression, Eurosport’s Head of Graphics Richard Lievre notes that simplicity and creativity have both been key factors for the channel: “We needed to evolve from our previous graphics system and we felt that XPression would be the right platform for us; it’s been easy to adopt, simple to use and augmented reality has opened up a great many creative possibilities for our team”.

Patrick Jeant, Head of Post Production at Eurosport, agrees. “XPression allows us to work with one single graphics package across all of the different domains within Eurosport where graphics are required – set up once, deploy everywhere. We’ve been one of the first broadcasters in France to use Ross’ augmented reality solution and we’re looking forward to building on the excellent content we’ve produced at the French Open tennis”.