Every stage from start to finish on all platforms, including 25 hours of exclusive content across most of Europe and an enhanced digital offering, underpin Eurosport’s coverage of the 105th Tour de France.

After its pioneering coverage of the event last year with every minute available to fans for the very first time, in 2018 every stage is once again available in its entirety on Eurosport TV and online via the Eurosport Player, eurosport.com and the integrated Eurosport app. 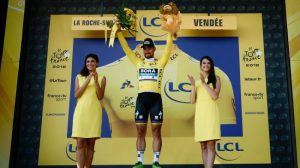 To support Eurosport’s increased digital offering and take its cycling coverage to more viewers than ever before, a free seven-day trial of the Eurosport Player is available for fans across Europe throughout the 2018 Tour de France.

In 2018 Eurosport is producing more local coverage of the Tour de France than ever before with fans in France, Germany, Sweden, UK and, for the first time, Poland, receiving dedicated local production of the race and International coverage available in a further 49 markets across Europe.

Eurosport will air more than 100 hours of live coverage during the 21-stage event with Tour de France Extra – a dedicated pre and post stage show – extending the live race coverage with expert analysis and insight. A prime-time highlights show – Tour Today – dissects each stage in in detail every race day of the Tour.

Tour De France stage winner Juan Antonio Flecha heads Eurosport’s international coverage with his daily ‘Juan & Only’ feature recapping all the on-road action straight from the finish line, as well as, presenting his Recon series previewing seven key stages that will determine the outcome of the iconic maillot jaune.

Alberto Contador, one of only seven men to win all three Grand Tours, including yellow jersey’s in 2007 and 2009, is joining the Eurosport Spain commentary team. El Pistolero, who retired in 2017, also features in Eurosport’s international coverage for crucial stages in the Pyrenees. Sean Kelly, winner of nine monument classics, leads analysis for Eurosport UK with Richard Virenque, winner of the King of the Mountains competition a record seven times, and Jacky Durand, a three-time stage winner, headlining Eurosport France’s Tour de France coverage.

In another digital enhancement for 2018, Eurosport has teamed-up with 2012 Tour de France winner Sir Bradley Wiggins to launch a new podcast show. The four-part series is broadcast every Monday of the Tour and available on all major podcast providers. Each episode is also filmed and made available for fans to watch exclusively on eurosport.com.

Emir Osmanbegovic, SVP Sports Content and Production at Eurosport, said: “The Tour de France is the biggest cycling race in the world and our coverage of this year’s event is bigger than ever before. We’ll have every minute of the race live — on all platforms — with more localised production, more legends of the sport providing expert analysis and more exclusive digital content.

“We’re proud of our heritage as the home of cycling and will continue to push the boundaries of broadcasting the sport in Europe with our digital-first approach giving fans complete control of their viewing experience. If you’re a cycling fan, Eurosport truly is the home of the sport and remains the best place to follow the Tour de France on all platforms and devices at home or on the go.”