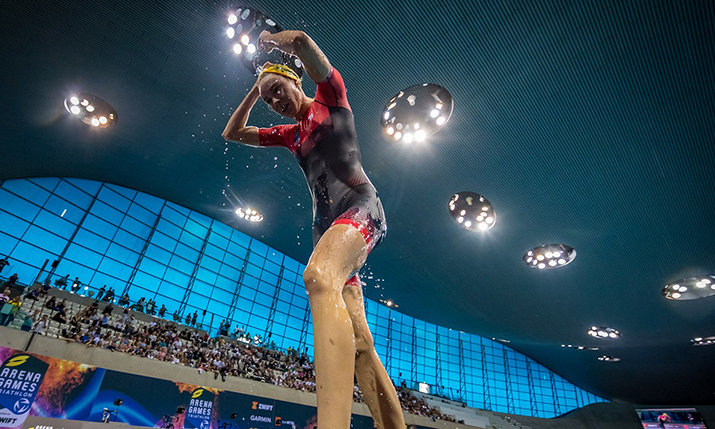 Aurora Media Worldwide and Eurovision Services are broadcasting the season finale of the first-ever Arena Games Triathlon (AGT) from Singapore next week.

As part of an agreement with Aurora Media Worldwide, Eurovision Services is providing contribution and distribution services for the three events in the 2022 AGT.

This trailblazing concept pioneered by Super League Triathlon in partnership with World Triathlon has already thrilled the crowds in Munich (9 April) and London (23 April) and is gearing up for a gripping finale in Singapore on 7 May where the world’s first esports triathlon World Champions will be crowned.

Eurovision Services is providing satellite newsgathering trucks on site, European and Americas satellite capacity and global satellite distribution of all AGT events, plus streaming services to the Super League Triathlon YouTube channel and six additional streams, as well as file delivery of a highlights package.

The real-life and virtual reality blended racing provides an immersive viewing experience that allows fans to get up close and personal with the best triathletes in the world without leaving the comfort of their seat. The event also gives esport fans, and lovers of sports statistics, the chance to enjoy live data from the athletes in real time.

The all-new 2022 Arena Games Triathlon World Championship Series also contributes points to the World Triathlon rankings, and the athletes who collect the most points over the course of the series will be awarded the first-ever triathlon esport World Titles in Singapore.

Eurovision Services will also deliver the same connectivity for the Super League Triathlon Championship Series, which will take place from August until November 2022.

Fabien Robineau, head of global sales and marketing at Eurovision Services, commented: “It’s great to see the Super League Triathlon going from strength to strength and bringing the sport to new audiences this year. The Eurovision Services Singapore team are looking forward to seeing our branding on the course for the season finale in Asia.”

David O’Carroll, operations director at Aurora Media Worldwide, said: “The Super League Triathlon takes on a new dimension this year as it works in partnership with World Triathlon on the Arena Games. It’s great to be working with Eurovision Services once again to deliver all the action from this innovative new competition format to broadcasters worldwide.”

Michael D’hulst, Super League Triathlon CEO, added: “We’re delighted to add some new locations to our calendar this year, as new continents grasp the appeal of our action-packed competition format. Given their expertise, it’s reassuring to know that our trusted partners Eurovision Services and Aurora Media Worldwide can easily take this expansion in their stride.”