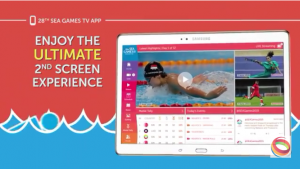 In addition to the multicam experience, the SEA Games App featured the typical bells and whistles

Multiscreen experience for large-scale sports events has come a long way in just a few years; events like the Olympics and FIFA World Cup offer fans new ways to consume live and on-demand video via their computers, tablets, and mobile phones. That evolution took another leap forward at the SEA Games in Singapore, when the Singapore Southeast Asian Games Organising Committee (SINGSOC) turned to EVS to develop and provide the production infrastructure for the SEA Games App, which features the most extensive live/near-live multicam video-delivery platform ever for a major multisport event.

The app, featuring content from all 36 sports at the SEA Games in June, was driven by EVS’s multimedia-production system, which enabled realtime ingest, multicam editing, and metadata enrichment of live content. In addition to ingest, clipping, and storage capabilities provided by EVS XT3 replay servers and IPDirector asset management, cloud-based C-Cast multiscreen-production solution connected with the onsite production infrastructure, enabling delivery of the live and near-live content to mobile devices. As a result, viewers were able to select and view multiple live games as well as on-demand replays and highlights from multiple camera angles via the iOS and Android apps.

“The main challenge was to produce up to five live competitions simultaneously and up to 20 productions per day for 15 days, with a very lean and efficient crew of five operators and two support staff,” says Stephane Jauroyou, VP, sales, Asia-Pacific region, EVS. “The pace was definitely more intense than at last year’s World Cup, and we had to face constant schedule changes, which also affected the production schedule. C-Cast was able to cope with the amount of videos produced for mobile devices.”

Developed in partnership with Netco Sports and launched on May 25, the SEA Games App is part of SINGSOC’s Digital SEA Games initiative. In addition to near-live multicam highlights, the app boasts the typical bells and whistles, including live streaming, sport videos, picture gallery, schedule, medal tally, and social-media integration.

Inside the EVS workflow

EVS, which also provided the end-to-end live-broadcast production center at Games Headquarters (GHQ), provided all infrastructure for the second-screen–delivery platform, including two XT3 servers, seven IPDirector asset-management suites, and C-Cast cloud-based multimedia service. C-Cast enabled remote production at the key venues (in conjunction with existing XT2 and XT3 servers) to connect the cloud-based production infrastructure. EVS’s role also comprised the design, development, and delivery of a new mobile application for iOS and Android devices in partnership with Netco Sports. And the company provided the operations and support crew to make the entire digital production possible. 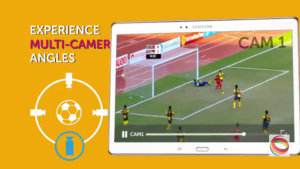 The multimedia production was set up alongside the primary GHQ system, allowing direct ingest of the main programme feed from the five main venues covered by C-Cast. Each IPDirector was operated by an experienced producer, and the five operators were able to work in parallel on five sports at the same time. All key actions were segmented live on IPDirector, triggering a fast, automatic, and remote extraction of multicam angles from the venues via C-Cast. Within seconds, the action from the TV program and the multicam angles were uploaded in C-Cast Central while the competition was under way. On the C-Cast Workspace, operators could quickly select the best angles and add compelling metadata to describe each action.

“We leveraged the EVS servers installed for the live production at each venue,” says Jauroyou. “And we added two C-Cast Agents in each of the five venues, which connected to C-Cast Central in the cloud.”

Immediately after publishing, the SEA Games TV app displayed the new clip of the action with the multicam angles. Users were able to watch up to five sports live with multicam review angles simultaneously on iOS and Android mobile devices. Other competitions from other venues were either live-streaming only or images uploaded to C-Cast after the events’ conclusion.

“EVS’s C-Cast is truly the only platform that can deliver live multimedia action in such a compelling fashion through un-seen, exceptional content to sports fans,” says Jauroyou. “It provides the best-quality video possible as it leverages the EVS live-production systems widely used in major sports events, eliminating the need to duplicate with extra recording systems.”

All the effort paid off for EVS and SINGSOC. The SEA Games App generated close to 250,000 downloads, with an average session length of more than 8 minutes (27% longer than the average for sports apps). In addition, 93% of users returned to the app after the first use.

Not surprisingly, most of the users’ time, 82%, was spent on live content. Multicam views also figured prominently: more than 40% of the unique video viewed featured multicamera views.

“EVS gained a lot of knowledge during the SEA Games on how to manage multisport multimedia digital production,” says Jauroyou. “Through this experience and with C-Cast, we’re now in an even better position to tackle large-scale events in the future. Operator feedback was very important during SEA Games in order to optimise the user interface and find better ways to make their work faster and simpler. The integration of C-Cast with the mobile app is absolutely crucial to keep viewers up to date and wanting to come back.”