It was a little more than a month ago that EVS rolled out its Overcam AI-based camera system at IBC and now it is rolling out EVS Media Hub, a cloud-based media portal that gives expanded ability for rights holders to make the most out of content created for an event. 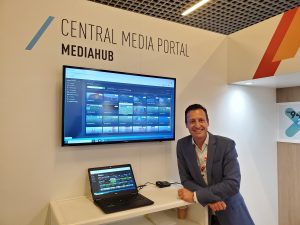 The system uses a web browser to allow a rights holder to have access to replay clips, isolated camera feeds, and even live feeds from the host broadcaster, thereby making it easier for their unilateral production needs to be met.

“The objective is to facilitate and accelerate the process of creating extra content for things like additional channels, social media, and streaming platforms,” says Nicolas Bourdon, EVS, SVP, marketing. “And the user can be at the broadcast center, at home or anywhere else.”

The user can see thumbnails of clips and even make quick edits and sub clips before moving the proxy into a target bin that delivers the high-resolution version. Another useful feature is that the system allows the user to know which clips have already been used, avoiding duplication of efforts and ensuring that as much fresh content as possible is utilized.

Bourdon says Overcam is still the big story for the company following IBC as it had a lot of visibility given awards at the show.

“Right now we are doing some proof-of-concept events as we want to crystalize it before the official release by next NAB,” says Bourdon. Bourdon says positive feedback at IBC for the newest version of the X-One unified production system is also creating strong potential for an Overcam/X-One combination.

“Combined with Overcam it could be a real killer,” he said.