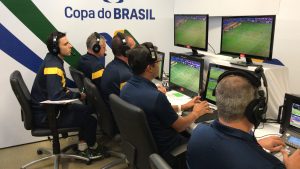 With video referee operations becoming increasingly common in soccer, the Brazilian Football Confederation has selected Broadcasting Televisão (BroadTV) to introduce a new VAR workflow based on EVS’ Xeebra system. The new solution is being used in the playoffs of the Copa do Brasil, the country’s domestic knockout competition.

The VAR workflow features four Xeebra systems from EVS, each of which allows an operator to review up to 16 HD cameras at once using a simple user interface. BroadTV will be responsible for the VAR infrastructure throughout the playoffs alongside a team of professional referees. It was BroadTV’s previous experience with the Brazilian confederation and its extensive knowledge of the live production environment that saw it rewarded the prestigious contract.

Over the last two years BroadTV and the Brazilian Confederation have worked together to iron out the expectations of a VAR service technology provider and to implement the right system for the confederation’s needs within professional soccer tournaments. The solution that has been put in place has been designed with full support from the local EVS team to create a VAR workflow that allows referees to work more effectively at major tournaments.

“As VAR has become more prominent, federations are increasingly finding that expertise in live production is a major contributing factor to rolling out successfully-operating VAR workflows,” said Salvatore De Luca, director at BroadTV. “Add to this the use of industry-standard replay technology instead of other proprietary systems, and we’re able to benefit from an instant operator base familiar with the technology who can both train and work alongside match officials.”

The four Xeebra systems will be paired with the new PMX server and will enable referees to review multiple camera angles live from the venues. Using the system’s intuitive touchscreen, users can zoom into selected images with a simple touch-and-pinch gesture to review every angle in detail – quickly, efficiently and in complete synchronisation.

“Video officiating has quickly become a notable area of our business because many leagues and federations – especially within Latin America – are wanting to adopt professional video systems for their VAR workflows,” said Alfredo Cabrera, VP Sales LATAM at EVS. “In order to achieve better officiating processes, the facilities operators being chosen as VAR service providers need to put in place technology that’s proven to be fast, robust and flexible enough to do the job.”

The Brazilian Football Confederation is commonly cited as the first to implement VAR technology into its professional tournaments and referee training courses have been completed ahead of this latest rollout for the Copa do Brasil. As part of this, referees have been trained by a representative of IFAB – the International Football Association Board – which oversees the worldwide implementation of VAR. During this session, referees were encouraged to keep in mind the philosophy of any VAR project that matches users’ benefits when using the Xeebra system – namely, minimal interference, maximum benefit.