ESPN was out in full force for its 26th consecutive year covering the Australian Open: 253 technical and production personnel on hand at Melbourne Park.

Tennis’s first major of the year always presents unique challenges for ESPN — most notably, the extreme distance and time difference (16 hours) between Melbourne and ESPN headquarters in Bristol, CT.

“The time difference between Bristol and Melbourne is one of the challenges, and the distance also makes it challenging from a transmission, planning, and delivery side,” said Dennis Cleary, director, remote production operations. “However, the years of experience working this event from our operations teams both in Australia and in Bristol helps alleviate some of these challenges.”

ESPN used cabin space provided by Tennis Australia for four control rooms for ESPN’s primetime production, ITV (the six-screen mosaic on DirecTV), ESPN International, and Tennis Channel. Gearhouse Broadcast once again provided technical facilities for Tennis Australia’s host broadcast — as it did for ESPN’s host- and domestic-feed operations at the US Open.

As usual, ESPN selected an assortment of feeds from Tennis Australia and produced its domestic, international, and ITV broadcasts around those host feeds. Individual court feeds were also transmitted to Bristol for digital distribution. 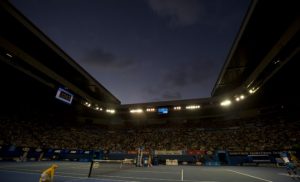 In the first 10 days of the Australian Open, late-running matches extended ESPN’s live coverage by 15% over what had been scheduled

Given the more than 16,000 miles between Melbourne and Bristol, ESPN had to deal with a 115-ms delay for communications and two seconds for video over fibre. In addition, the distance meant that ESPN’s operations team had to be extra careful to ensure that all equipment was shipped on time.

“While planning for the tournament,” Cleary explained, “we need to make sure we have all of our shipments in line and in the hands of our vendor early so they can all arrive on time in Australia. If equipment breaks or something is forgotten, it is not easy to get something shipped from the US overnight.”

ESPN’s studio set in Melbourne was once again located on the gantry overlooking Garden Square. As for highlights of match coverage, ESPN again had access to Tennis Australia’s NetCam at Rod Laver, Margaret Court, and Melbourne arenas. A Spidercam wired aerial system was also deployed at Rod Laver Arena.

“Over the past years,” said Cleary, “ESPN has continued to work with all of our vendors and production to find efficiencies while increasing the amount of content we produce and distribute across all of our platforms. I am very proud of our onsite operations team. Planning for the Australian Open, French Open, Wimbledon, and the US Open is a year-round commitment.”

ESPN’s production and operations teams worked as hard as ever in Melbourne, televising 110 hours of live coverage during the tournament’s first 10 days. Thanks to long-running matches’ extending the telecast windows into the morning hours, that coverage was 15% over the 95.5 hours scheduled. The teams’ efforts paid off: the audience for ESPN overnight live telecasts through the first 10 days was up 35% from a year ago, averaging 335,000 viewers vs. 249,000 in 2018.