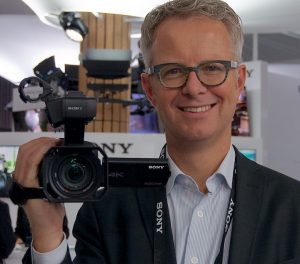 High dynamic range is an important part of the appeal of Ultra HD, but it doesn’t need the extra resolution to work its magic. Indeed, the prospect of producing HD with HDR was one of the main technology themes of 2017.

There are already HD (1080p) TV sets available that offer HDR (mainly smaller sets, where UHD would be overkill anyway), while some consumers are getting used to HD HDR within video games using Sony’s HD-only PS4 console. At the sort of viewing distances most people sit from their TV sets, the increased contrast and richer colours are more noticeable than any increase in resolution – indeed, they make the picture look sharper. Very few people sit close enough to their sets to see the resolution difference between HD and UHD for typical consumer set sizes.

This means that HD HDR could offer many of the perceived benefits of UHD without all of the additional costs in processing and infrastructure. For broadcasters with limited opportunity to increase their bandwidth, particularly from terrestrial transmitters, HD HDR could also be a useful way of retaining those viewers who have invested in UHD sets.

“A movie theatre is about 48 nits, but the room is so dark it still looks nice and bright. Your TV [Rec.709] is actually twice the brightness of a movie theatre screen […]. That 100 nit [limit] was established in 1932. TVs today can do a whole lot more, and we’re unlocking that with HDR,” John Humphrey, VP of business development, Hitachi Kokusai Electric America, told a recent SMPTE meeting. The target for HLG and PQ is 1,000 nits – the theoretical limit of human eyesight is about 10,000 nits, which, as he said, is so bright it hurts.

A key requirement for HDR is at least a 10-bit display, because existing 8-bit displays will give contouring. Dolby Vision uses 12-bit displays. Those bits also have to be re-allocated to make best use of the signal, as human eyes are very sensitive to mid-level and dark tones, so extra bits in the highlight area would be wasted.

However, as Humphrey added, those 10 bits must be maintained the whole way from camera to screen. “If anything truncates the bits to eight, HDR is gone. Until we get all the infrastructure there, we can’t do HDR on the professional side.”

Wide colour gamut is not part of HD HDR, but then no current TV set can do SMPTE 2020 colour, “the best they can do is DCI-P3.”

For many, the most important context for HD HDR is where it fits their business financially. For Studio Berlin, which has recently started using its first UHD OB (Ü9), the lower cost of HD HDR is a consideration.

“With the Ü9 we are prepared for all future production formats. Of course, it is exciting how HDR will move forward. Dolby Vision, HDR10+ – or whatever technology, I can imagine HDR in 3G [1080p] as well,” said Matthias Alexandru, CTO, Studio Berlin. “The amount of data with UHD is considerably higher than with 3G. One more argument in favour of 3G is processing the material in the usual HD workflows. For me, thinking from a cost-perspective, 3G-HDR is the more exciting format.”

HDR in an instant 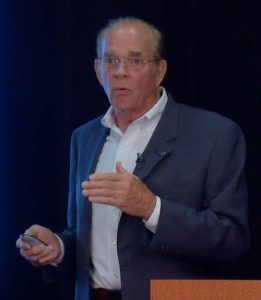 Hitachi’s John Humphrey speaking at a SMPTE seminar on HDR

Any camera that can produce UHD can be used to deliver HD HDR, but most of those could require post-production thanks to using various Log workflows. However, many recently launched cameras aimed at live applications can also deliver HDR directly, including several that are HD only.

For example, Sony’s new PXW-Z90 is a compact UHD camcorder, designed for news applications. Alongside support of S-Log2 and S-Log3 for post-produced HDR, it also supports Sony’s Instant HDR, which means “it can switch to support Hybrid Log-Gamma, so you can easily record HDR content without the need for colour grading, which will speed up your workflow,” explained Claus Pfeifer, head of technical sales, Sony Europe. Handily, it can also offer 240 frames per second HD (time limited) or 120fps without time limits, making it useful as a compact, low-cost camera for sports production. Sony is also updating some of its earlier cameras, such as the shoulder-mount PXW-Z450 with Instant HDR, while its PXW-FS5 and PXW-Z150 can also support HLG recording via a software update.

For its UHD cameras without Instant HDR (such as the HDC-4800, HDC-4300 and HDC-P43), Sony’s recently-introduced SR Live for HDR workflow offers simultaneous live production of UHD HDR, HD HDR and HD SDR from images produced using the S-Log3 format – its HDRC-4000 HDR Production Converter Unit can then deliver both PQ (such as Dolby Vision) and HLG HDR formats. The HDC-2500 can also be upgraded using a processor board to provide HD HDR capability.

Panasonic is also supporting HLG, most notably on its low-cost GH5 4K/UHD compact mirrorless camera, and its new EVA1 mid-range camcorder. It also updated its studio line-up to include HDR support both in HD and 4K for the AK-UC3000 (UHD) and AK-HC5000 (HD) studio cameras as well as the AK-UB300 (UHD) box camera.

However, one of the key benefits of HLG, which was jointly developed for broadcast by the BBC and NHK, is that you don’t need to deliver a SDR version, as it is backwards compatible with the six stops or so of SDR (Rec.709) – the resulting picture will look a little darker, but should be usable.

HLG has no metadata, so there is nothing to get lost or corrupted. PQ uses static metadata, while Dolby Vision uses dynamic metadata, to get the most out of each image, but it is designed for the cinema. “The harder you push HDR, the less compatible it’s going to be with SDR,” said Humphrey.

However, not all HLG implementations will deliver ideal results in all applications. As the DoP and cinematographer Alister Chapman points out: HLG “was never meant to be used for capture, it was specifically designed for delivery. HLG is certainly very useful if you plan to directly feed HDR to a TV that supports HLG. But if you plan on creating HDR content that will be viewed on both HLG TV’s and the more common PQ/ST2084 TV’s then HLG is NOT what you want. You would be far, far better off shooting with S-Log and then grading your footage to these two very different HDR standards. If you try to convert HLG to PQ it is not going to look nearly as good as if you start with S-Log,” he stated.

It is also important to check if the camera will record HDR in 10 bit in the resolution you are shooting. For example, Sony’s FS5 records UHD in 8 bit, although it does HD in 10 bit while Raw, which needs post processing, is 12-bit.

“If you want to get footage that works both with an HLG HDR TV and a SDR 709 TV then you need to expose carefully,” added Chapman. “A small bit of over exposure won’t hurt the image when you view it on a Rec.709 TV or monitor, so it will look OK in the viewfinder. But on an HDR TV any over exposure could result in skin tones that look much too bright and an image that is unpleasantly bright. As a guide you should expose diffuse 90% white (a white card or white piece of paper) at no more than 75%. Skin tones should be around 55 to 60%. You should not expose HLG as brightly as you do Rec.709.” 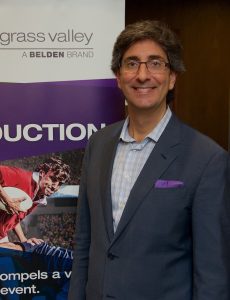 Marco Lopez, Grass Valley’s president believes that HDR “gives great benefit for little cost,” as it doesn’t require the processing power, storage and bandwidth of UHD to deliver HDR to viewers. He wants to give customers “more flexibility in how they adopt these technologies, such as HDR in an HD environment,” as with news and sport.

While UHD is critical for some broadcasters, “for others it’s not the quantity of pixels but getting better pixels, such as wider dynamic range,” added Tim Thraves, Grass Valley’s VP marketing. “We want to let them choose how they want to proceed,”

“It is not just about the camera supporting HDR, but in taking the native 10-bit HDR workflow across the product range,” said Lopez. “We want to allow our customers to create better content with more and better quality pixels.”

Grass Valley’s new XCU Universe XF base station (for its LDX 86 cameras) can automatically create the appropriate PQ or HLG versions of HDR, because “we want to go HDR as close to the source as possible,” said Lopez. For live HDR production, it can also automatically produce a second SDR signal using a live downmapper.

Both Ikegami and Hitachi offer dedicated HD HDR cameras. Hitachi’s Z-HD5500 1080p studio and field production camera supports HLG and HPQ (which is compatible with the HDR10 open standard for consumer TVs), as does its DK-H200 multi-format, compact HD box camera. Meanwhile, Ikegami’s new HD HDR camera is the HDK-73 system camera, which supports HLG and comes in a package (including CCU, fibre connector, viewfinder and remote control) for less than €20,000.

“There is much more interest in HD TV in HDR than in 4K,” said Michael Lätzsch, division manager, broadcast and professional video division, Ikegami Electronics (Europe). “People are looking for the possibility to add more value to their images, but with 4K you invest a hell of a lot of money for your infrastructure, but there are only limited UHD transmission possibilities right now.”

However, HD HDR means just having a camera that can do HDR and the appropriate monitors, but the mixer, router, playout server, transmitter and cables can remain the same. He expects to sell more HDR HD cameras over the next year or so than UHD.