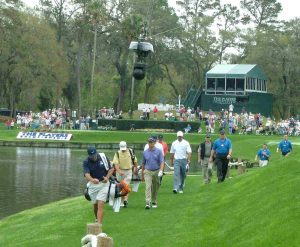 Trialling innovative camera technologies ahead of what promises to be a landmark year for golf broadcasting in France.

In one year’s time, at the end of September 2018, France will host one of the most prestigious golf competitions in the world. Once again the Ryder Cup will feature American and European teams, and will take place at Le Golf National, situated some 30 kilometers south west of Paris. The golf course is spectacular and consistently ranked among the top ten in Europe.

Although broadcasts on terrestrial channels are rare, there are around 420,000 subscribed viewers in France who can benefit from two pay channels dedicated to golf. Golf+, part of the Canal+ group, has 520,000 subscribers.

“Golf+ airs more than 2,000 hours of live coverage every year. For major events we share broadcasting with Canal+ Sport. We also produce in-house magazine shows including a 60-minute programme with a special guest spot each week,” explained Thierry David, managing editor of Golf+. Golf channel, operated by the AB group, does not have as many broadcasting rights and airs mostly English-speaking programmes.

France routinely hosts two great golf tournaments: the Evian women’s championship and the men’s Open de France. Although the leading French service providers have worked on some golf events it has mostly been in the form of partial collaborations only. The PGA Tour and the European Tour run their own broadcast operations, and often call on the same crews throughout the year (often from CTV, a subsidiary of the Euromedia Group).

“This is absolutely normal and it could hardly be otherwise,” said François-Charles Bideaux, director of sports productions for Canal+ and former producer of the Evian Championship. “Like the FOM and its management of the Formula One races, it is preferable to have a single dedicated team for all events related to one sport. Firstly, the production is sure to run smoothly thanks to a well-oiled machine, which is certainly the case for golf, and secondly the services provider who has to invest heavily can leverage costs over a longer period of time.”

Admittedly golf coverage requires significant resources. “In order to film 18 holes it is not uncommon to use up to 25 cameras and major remote production means. Depending on the layout of the course it is sometimes necessary to install a relay tower for some tournaments,” observed AMP Visual TV’s  Fabrice Miannay, who also has some golf filming experience.

Super-slow motion and other camera movement shots are used frequently to enhance the golf course views as well as footage of the spectators.

Aerial and sports camera equipment specialist Luc Poullain of ACS France confirms that its large sensor cameras could be used for filming golf events. “We have used our Cablecams for aerial shots of golf courses in the past. This could once again be the case using our Shotover G1 with its light gyro-stabilised mount that is able to film with very large zoom lenses.”

At present, drones are only used before live coverage to present the golf course to the television viewers. However, alternative filming solutions are being considered by the various French service providers. Some observers perceive that the French are slightly envious of British predominance in the field of golf sports production, so they are trying to take the lead by proposing the use of innovative technical equipment to film and broadcast golf tournaments.