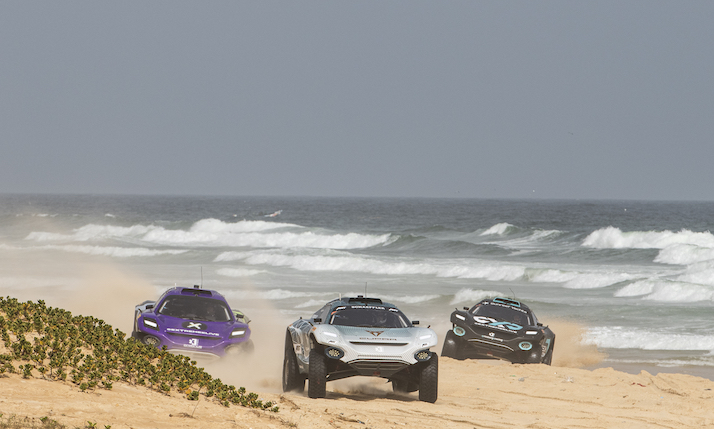 The Ocean X-Prix on 30 May in Lac Rose, Senegal. Photo by Charly Lopez/LAT Images

It is well-known that Russia is one of the most vulnerable countries to climate change, but fortunately its interest in electric mobility is currently on the rise. Statistics show that for the second year running, the country has set records for electric car sales that surprisingly even outpace its green-minded Scandinavian neighbours. In 2020, 95% more electric vehicles were sold in Russia compared to 2019 – due in part to customs duties being eliminated on EV imports as well as general population response to environmental concerns.

Ali Russell, chief marketing officer at Extreme E, said: “Extreme E is delighted to be reaching Russian audiences through Motorsport TV. Russia is a hugely important region for our series and, coupled with the fact that there is an increasing interest in the EV sector here, makes me even more pleased to be bringing viewers our unique and thrilling electric racing package.

Ksenia Bortova, editor-in-chief at Motorsport TV Russia, said: “We are very happy to broadcast Extreme E on our TV channel and spread the word about this amazing new championship to the Russian-speaking audience. I am sure that such a project will attract the attention of Russian fans and ecology supporters. It is clear that the topic of ecology and green energy is among the most important all over the world now while Russia covers about one-eighth of the world’s land surface.”

Extreme E has brought together the biggest names in motorsport for its ‘race without a trace’ championship including Formula One World Champions Lewis Hamilton, Nico Rosberg and Jenson Button, along with American motorsport legends including Chip Ganassi and Michael Andretti. Each of the teams field both a male and female driver – a world first in motorsport – in a bid for gender equality.

The inaugural X Prix – the Desert X Prix – took place in Saudi Arabia in April highlighting the effects of desertification, followed by the Ocean X Prix which took place in Senegal at the end May focusing on ocean health and issues surrounding rising sea level and plastic pollution. Through a variety of Legacy Programmes, the series will leave a long-lasting positive impact to support communities surrounding these areas.

The next event is the Arctic X Prix in Kangerlussuaq, Greenland from 28-29 August.