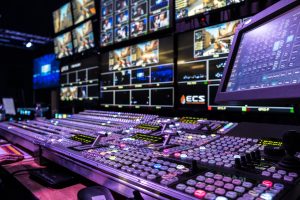 FACEIT is the world’s leading competitive gaming platform for online multiplayer games and creator of the Esports Championship Series (ECS), a Counter Strike: Global Offensive (CSGO) league that offers a $250k grand prize each season. In recognition of its continuing expansion FACEIT – in conjunction with its solutions provider Gearhouse – recently decided to implement a proven routing and switching core with the K-Frame S-series Video Production Center from Grass Valley, a Belden Brand, connected up to a GV Sirius SDI Router for its e-sports tournament production.

The equipment has already been utilised at some high profile events, including the ECS Season 5 Finals at the SSE Arena, Wembley, London, from 8-10 June.

The most common video game genres associated with e-sports are real-time strategy (RTS), first-person shooter (FPS), fighting, and multiplayer online battle arena (MOBA). Tournaments such as The International, the League of Legends World Championship, ECS and the Intel Extreme Masters provide live broadcasts of the competition and prize money to competitors.

Andrew Lane, technical broadcast manager for FACEIT, states: “E-sports is the fastest growing spectator sport in the world and Grass Valley has been an essential partner as we see our business increase. We choose Grass Valley for our productions as they provide the most innovative and high-quality equipment to cope with this fast-growing industry.”

The increasing availability of online streaming media platforms has become central to the growth and promotion of e-sports competitions. The 2017 statistics indicate that the global number of frequent e-sports viewers amounted to 143 million. This number is projected to reach 250 million in 2021 (Statista 2018). 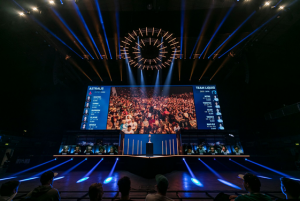 Tim Banks, vice-president of sales and marketing EMEA, Grass Valley, states: “Our production switcher workflow is incomparable. Gamers depend on effective, quality broadcasts, and we’re thrilled to be providing FACEIT with a system that will help the company continue to deliver exceptional programming. With the GV K-Frame switcher with a Kayenne panel systems combine ultimate mid-range switcher performance, along with proven workflows and simplified control of complex productions, with multiformat support including 1080p and 4K UHD. These unrivalled capabilities are offered as two system packages, with 3 M/Es or 2 M/Es, for exceptional affordability.”

Different signal formats are configurable in any combination of 24 channel input or output blocks, up to 576 x 1152 in one frame.