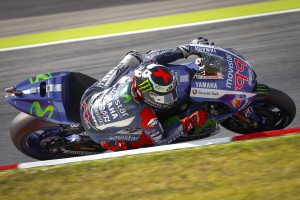 Jorge Lorenzo in action at the MotoGP de Catalunya 2015

Similar to how NFL fans get misty-eyed seeing photos of barely-padded players sporting thin leather helmets back in the olden days, or when tennis nuts cackle over the heavy wooden rackets and short-shorts of yesteryear, there is some charming video featuring some pretty archaic equipment that was once used in the highly technical sport of MotoGP racing, writes Kirsten Nelson. Way back in 1985, the World Championship Grand Prix of motorcycle racing was using — pause for nostalgic sigh — a comparatively gargantuan 715-gram camera and 610-gram control unit on-board.

Can you even believe that they strapped so much extra ballast onto a bike that would be hurtling around a track at speeds in excess of 200kph? Who would be crazy enough to be the guinea pig on that one? Randy Mamola, the guy who happened to win that race, that’s who. And he was still happy to tell the story and celebrate 30 years of onboard camera evolution on June 27 at the Assen TT Circuit in the Netherlands, where he launched the camera into g-force history on that day three decades ago.

There are several familiar milestones in the progression of MotoGP’s on-board camera development, but what sets its particular miniaturisation and high-res-ification apart is the fact that each feat was accomplished in-house with a dedicated team of engineers who not only collaborated with, but provided crucial prototype testing on Sony RF cameras, Apple Final Cut Pro software (before lights-out on that package), Canon and Fuji lenses, and probably a good deal of production, media streaming and plenty of other high-speed-racing video technology.

MotoGP even beat Formula One on a couple of steps, and probably rode alongside NASCAR on a few others, but management of the latter has reportedly expressed OEM envy in sharing behind-the-scenes development conversations with the championship’s Spanish parent management company, Dorna Sports SL.

Ultimately, the team at Dorna understands that MotoGP is a sport heavily dependent on premium video coverage. “These teams and riders are delivering premium racing, and we must in turn deliver to them and to fans premium content and premium technology,” emphasises Manel Arroyo, managing director of media for Dorna, and himself a former broadcast journalist and motorcycle racing commentator.

To do this, he asserts with a degree of passion in his voice, “we listen to our fans about what they want, and we talk a lot with the broadcasters and video technology manufacturers. We are always monitoring other leagues, other championships, just to see how the market reacts, how the user reacts. It’s our duty, our obligation to work in that way.” 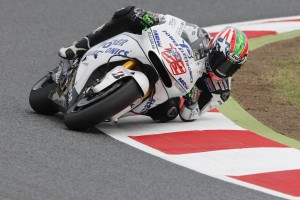 So what has the racing world learned from Dorna? There is actually much to envy about an organisation that invests heavily in R&D and sends 200 media personnel to each race. Engineering and television production was still outsourced when Dorna acquired the rights to MotoGP in 1992, but seeking an end to broadcast inconsistencies, it took all media operations in-house by 2000. Work at its Barcelona headquarters began in earnest to carve kilograms off cameras, halving their weight between 2002 and 2006 and then in partnership with Vislink/Gigawave doubling the number to four of the new lightweight cameras that could be mounted and controlled on each bike.

The switch from analogue to digital transmission in 2007 was accompanied by new RF camera feats that enabled helicopter relay transmission that could not be undone in rain, through tunnels or even in team garages. Four years later, Dorna was then the first to send live 1080i video from a bike.

It should be said that the motorcycles raced in MotoGP are akin to speeding computer arrays, since 2008 carrying a data module that transmits bike telemetry and actuates servos. And those crazy lean-angles, the ones that put riders’ knees and elbows on the ground as they make their way through a turn, were best captured by Dorna’s contribution to the gyroscopic camera world in 2010.

Today the coolest, whiz-bang MotoGP on-board is a proprietary 360-degree gyroscopic camera, first prototyped in 2014, and currently riding in an ongoing test phase, usually with the sport’s most beloved celebrity rider Valentino Rossi.

To optimise use of the 360-degree camera rotation within and separate from the gyroscopic action, Dorna is developing new software that will automate the tracking of other riders, requiring communication between both bikes. This development will take some time, notes Dorna Director of TV Sergi Sendra. “Tell me how many times we will have somebody fighting to pass for more than one lap? If a rider is alone on the track, it’s a problem, because then we don’t have somebody to watch. It’s difficult to test something that only exists during the races.”

True to the race-centric deployment of astounding amounts of new technology, media-related and motorcycle-related, the on-board’s 30th anniversary at Assen was captured by no less than 100 bike-mounted units across the three World Championship classes. That’s a lot of cameras, and Dorna certainly has plenty of experience controlling and producing races with all those feeds, pioneering streaming video and website presence along the way.

“This means possibly we are making the rules: we have established a media language to produce motorsports, in terms of how fans experience the races in all aspects, the cut of the cameras, the language of the graphics, and how we explain the elements of the race with the special camera angles,” Arroyo says. “I’m proud that today our sport is considered premium in terms of production, and I’m proud to be around these riders that are making unbelievable racing. I am proud of our team because they work with passion — we have a very passionate team, and that is key.”