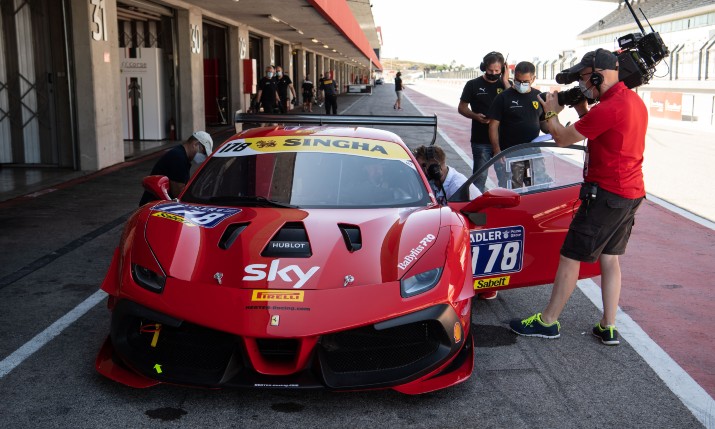 A clutch of new broadcast technologies were on show in Portimao, Portugal last weekend (1-2 August) during the host coverage of The Ferrari Challenge, the single-brand championship organised by Ferrari Corse Clienti.

The Ferrari Challenge includes seven races in Europe plus the World Finals that will take place in Abu Dhabi on 7 November.

All the races are being held behind closed doors without audiences and there are fewer drivers due to travel complexities caused by the COVID-19 pandemic.

The Portugal event last weekend was the third championship meeting and was shown on Sky Italia channels with the international feed distributed to several countries around the world.

The host broadcaster for all the events in the Ferrari Challenge is the Italian broadcast production service company NVP, which uses its own vehicles and crews.

The operation is COVID-secure, of course, with strict protocols followed to ensure social distancing and hand hygiene.

For coverage of the Ferrari Challenge, one of two flagship twin vehicles is used. OB6 is a triple-expanding unit with 34 Grass Valley LDX86 cameras, Dolby E audio, 12 replay stations and six producer stations.

The set up of the different circuits is particularly interesting and is managed with passive fibre for the camera signals with a central matrix system, internally engineered by the research and development department of NVP.

The connections are made with 24 fibres in full passive mode and up to 10 hubs placed on the circuit to allow control of all cameras from the gallery and move them to follow the action.

“Our system allows us to carry out the insertion of live advertising in AR, an activity that is usually quite difficult to manage in the filming of motorsport because of the fast movements of the cars.”

Each camera is managed on two fibres through CWDM multiplexing which allows 4K UHD shooting.

Ivan Pintabona, the chief technology officer at NVP, told SVG Europe: “The fibre system we use for all circuits is very light and this makes installation, management and all connections very fast, cheap and functional.

“We had already tested the system in the first few races and it allowed us to halve the set-up time by laying down fibre backbones that also allows us to manage the signals of the reception system of the radio cameras on board and those on the track.

“The fibres are then “exploded” with a branching through the hubs that allow us to reach every useful point and manage flows at 12Gb in 4K.”

At the moment the coverage airs in HD but it is expected to move to 4K even before the end of the current championship, despite the general slowdown of the whole set-up due to COVID-19, he adds. 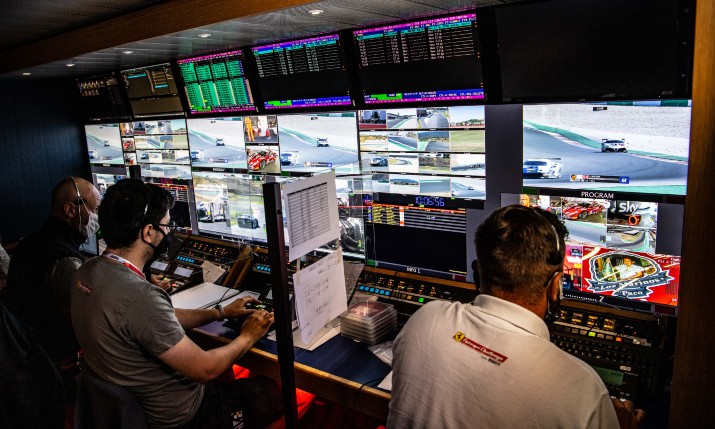 Another very interesting feature of the set-up used for the Ferrari Challenge is that NVP has implemented robotic cameras that pilot Brainstorm’s InfinitySet augmented reality (AR) system for graphic insertions, sponsors, logos and advertisements.

“Since the first test in the championship, the new virtual frontier that we are travelling with Ferrari has led us to complete tests on the two previous circuits,” continues Pintabona.

“Our system allows us to carry out the insertion of live advertising in AR, an activity that is usually quite difficult to manage in the filming of motorsport because of the fast movements of the cars that we follow.” 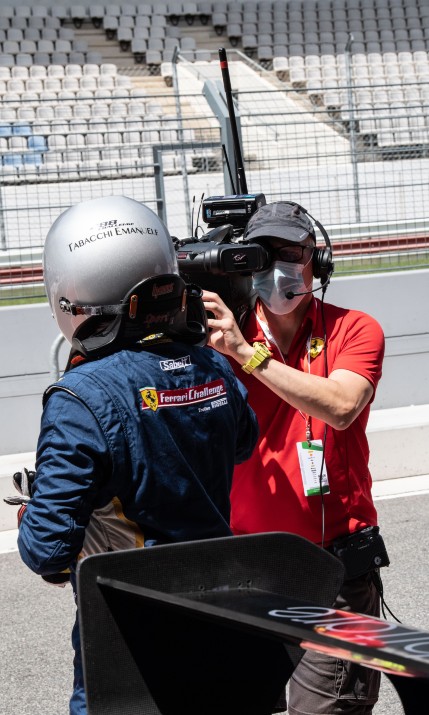 Thanks to a partnership with Movicom, however, X and Y coordinates are generated on the live signals from the robotic cameras to allow a graphic reconstruction of the concerned scenario.

“Then all the optical aberrations are corrected and logos or graphics or any graphic element Ferrari requires can be inserted,” he says.

“In football or more geometric sports situations, this tracking procedure is much simpler, while here the non-linear environment creates objective difficulties.”

To make this possible, the hardware tracking generated by the robotic cameras allows real-time interaction between the camera movements and advertising inserts that are perceived by the spectator at home as if they were really on the circuit.

The operator on board the OB van works on remote panels and performs the camera movements requested by the director, with pan, tilt and zoom.

The live signals enter the video mixer, where the logos, advertisements and sponsors are inserted seamlessly into the action.

Radio cameras on board

In addition to the optical fibres within the backbone and related hubs that make it possible to manage all the signals for the Ferrari Challenge, NVP relies heavily on radio frequency (RF) devices too.

In addition to the two Grass Valley LDK 86 cameras equipped with a Vislink radio link that operates in the pit and pit lane areas, some Marshall mini cameras are installed in some cars, each managing particular shots.

After testing on MotoGP and Formula 1, this system was used for the first time on the Ferrari Challenge championship.

The on-board system, using Vislink technology, provides on the reception side several MDU modules interconnected in fibre with the whole system by means of special splitters and decoders.

The truly innovative part is the transmission with a proprietary Vislink protocol based on more directional telemetry between the transmitters and the reception.
Onboard, each transmitter can manage up to four cameras, including remote pan and tilt movement.

Onboard the OB truck, a touchscreen software panel allows users to control the mechanical head movements of the cameras and to select, by means of an internal matrix inside the transmitter, the camera that provides the useful shot and the relative signal.

The same transmitter, again in bidirectional transmission to and from the racing car, manages the communications detected by the car’s control units.

This is part of an experiment that NVP is carrying out in cooperation with Ferrari and affords the opportunity to have a first-hand set of telemetry data available.

The control unit, in fact, detects a lot of data, such as speed, number of laps, braking, G force, etc., which become available in real-time in the control room and in the pits.

This unique information, which until now was only downloaded from the cars after the race and therefore only available in deferred mode, becomes very useful because it is received live and can be transformed into real-time graphics for enriching feed broadcasts.

The data travels via radio in a bi-directional ink, therefore the race master direction can also use this communication channel towards the cars to send alert signals or important data for immediate feedback from the driver.

Vislink’s radio system has been designed, implemented and managed by NVP for each Grand Prix, with the aforementioned fibre management and sorting system, in order to reach the various points where the 16 reception antennas are mounted along the circuit.

All images are copyright Ferrari.