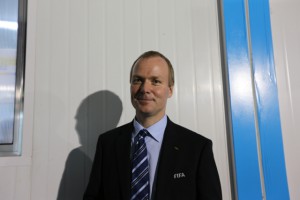 The FIFA Confederations Cup came to a close in Brazil on 30 June, proving the viability of some new workflows that will be implemented in 2014 for the HD needs of broadcasters around the world. In addition, it was a crucial test for the potential for a new offering for FIFA World Cup media-rights holders: a 4K feed.

During the three-week tournament, FIFA TV, HBS, and Sony worked with OB provider Telegenic to produce three matches in 4K in Belo Horizonte. The tests proved the viability of producing live multicamera 4K coverage of football without negatively impacting the HD production.

“The way we are now structured, we are far closer to the production services, and they will work with our sales team to see if it is possible to do 4K not as a technology test but as a project that makes economic sense,” says Niclas Ericson, FIFA TV director. “The new technologies enable us to deliver better sound, sharper images, more expression and emotion from the action on the pitch — allowing us to engage further with our fans.” 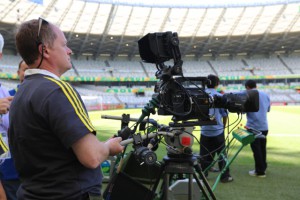 Ericson says decisions on whether or not 4K and 3D will be offered next summer will be made as soon as possible because adding those services impacts other FIFA World Cup operations, such as seat kills and other space-requirement decisions. For example, camera-platform needs are much larger if there is going to be an HD camera next to a 4K camera and/or a 3D camera, and those larger platforms will require coveted seats to be unavailable.

But, for the past 10 years, since FIFA took more control over the production process, the organization has been willing to make those tough calls in order to first go all HD in 2006, add 3D broadcasts in 2010, and now look at adding 4K and possibly even 8K to the mix in 2014.

“We are happy that the FIFA World Cup is used to advance consumer technologies,” adds Ericson. “So the question now is how we can get it financed.”

That economic question relies heavily on how much it will cost to produce the 4K feed. And the productions in Belo Horizonte proved that there could be a number of options that can swing those costs higher or lower. First, of course, is the question of how many matches will be produced in 4K (or 3D for that matter). Will all of the matches or just some of them be available in 4K or 3D? Or will it just be the semifinal and final or just the final? All of those options have vastly different costs.

And then there are production decisions. The tests this month proved that a mix of HD, 4K, and even 8K cameras can all be upconverted and downconverted for use within an HD, 4K, or even 8K production. There are compromises in resolution if only six true 4K cameras are used and the remaining 15 angles are upconverted HD, but upconverting those 15 cameras cuts down on expenses related to personnel, equipment rental, and seat kills.

As for 8K, NHK has been a solid FIFA partner for many years, and, after  demonstrating 8K technology during the London Olympics last year, the broadcaster approached FIFA about doing tests during the FIFA Confederations Cup.

“We were delighted they would want to do it at the biggest sporting event in the world, and, if we were to do 8K next year, it may be for some public viewing [like during the Olympics],” says Ericson. “They also will not ask for too much space as they only need one camera with a few others for close-ups, but it was interesting to see the collaboration between the 4K and 8K productions here as the 4K was upconverted.”

As for 3D, while ESPN will not have a 3D service in 2014, there are still other broadcasters, like Al Jazeera and CCTV, who are rumored to be interested in the format.

“When we did 3D in 2010 in South Africa, there were  nine to 10 broadcasters who took the 3D feed, and a few of those may scale back, depending on the cost of the feed,” says Ericson. “But there are also some new ones, so the question is, can we get 15 or 20 takers?

“We are also interested in having the best resolution for future archive needs,” he continues. “Therefore, we need to consider Ultra HD for the 2014 FIFA World Cup, which will be a spectacular one, remembering the atmosphere at Maracana during the Confederations Cup Final!”

Football fans and fans of next-generation broadcast technologies should know the answer soon.