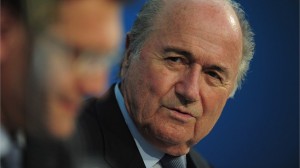 Goal or no goal? Referees will soon no longer have to decide themselves whether the ball has crossed the line or not without technical assistance. Following nine months of testing in England, Germany, Hungary and Italy, at a special meeting in Zurich on 5 July, the International Football Association Board (IFAB) decided to introduce goal-line technology into football. Of the eight companies that took part in the first round of tests, only two systems – Hawk-Eye and GoalRef – successfully completed the process and can now apply to become FIFA goal-line technology licensees.

FIFA President Joseph S. Blatter discusses 5 July’s historic, unanimous decision by the IFAB (International Football Association Board) to allow goal-line technology to be used in the game. Speaking to members of the international press, he also talked about additional assistant referees, his dramatic change in stance on technology and the need to maintain football’s human face. Click here for the complete story.

GoalRef system – magnetic field technology
The GoalRef system creates the radio equivalent of a light curtain. Low magnetic fields are produced around the goal, and as soon as the ball, which is fitted with a compact electronic device, fully crosses the line, a minor change in the magnetic field is detected, thus allowing the exact position of the ball to be established. If a goal has been scored, an alert is transmitted to the match officials via a radio signal within one second, with a message displayed on their watches and via vibration.

Hawk-Eye system – goal-line camera technology
The Hawk-Eye system uses six to eight high-speed cameras set up at different angles at each end to calculate the exact position of the ball. The data from the cameras is then transferred to video software. From this data, the system generates a graphic image (3D) of the ball’s trajectory. The match officials are informed of whether or not it was a goal within one second.

The FIFA licensing process
With immediate effect, the manufacturers of goal-line technology can apply to FIFA for a licence to install their system. Before obtaining a licence, the technology must undergo a series of extensive laboratory and field tests as well as testing in simulated match situations.

Once the tests have been passed and the application requirements have been met, the system is accepted into the licensing programme. After signing the contracts with FIFA, the manufacturer receives official authorisation to install the goal-line technology worldwide.

Once the system has been installed in a stadium, it undergoes a final inspection to check its functionality. The results of the final installation test must be accepted by the licensee’s customer, i.e. the competition organiser, club or stadium operator, before the system can be put into operation.

As soon as FIFA has received and checked all of the signed documents, the installation is awarded the FIFA QUALITY PRO mark. The goal-line technology can then be used in official matches. More information on the GLT Quality Programme, including videos, Q&As and more information on the test manual and licensing procedure, can be found at: www.FIFA.com/QUALITY.