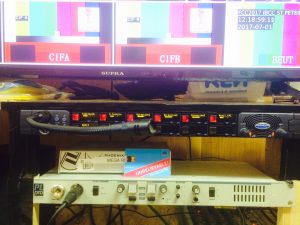 Clear-Com has announced that the Chilean national broadcaster, Red Televisiva Megavision S.A. (Mega), is utilising Eclipse digital matrix system with IP-enabled V-Series intercom user panels to cover the FIFA Confederations Cup men’s football tournament in Russia. The V-Series intercom panels use the internet to interconnect Mega OB vans at stadiums in Kazan, Moscow, and Sochi with the Mega production crew at the International Broadcast Center (IBC) in St. Petersburg, and Mega’s central studios in Santiago, Chile. The Intercom-over-IP signals from Russia are fed into Mega’s Eclipse intercom system in Santiago.

New to Mega’s setup is the deployment of IP-enabled V-Series panels at the various communication locations, which are connected to the existing Eclipse intercom system, as part of a larger series of improvements. “Overall, we are upgrading and upscaling our intercom system to support new applications and technological solutions as needed,” said Antonio Ormazabal, Mega’s Operations Manager. “This includes being able to connect to our remote production crews anywhere in the world efficiently, reliably, and cost-effectively.”

Deciding to connect its intercoms remotely via IP solves a number of problems for this national Chilean broadcaster. “It is becoming increasingly difficult to find ISDN or analog telephone lines for international events,” said Ormazabal. “Adding a number of Clear-Com V-Series user panels allow us to connect instead via IP, since internet is pretty much everywhere these days.”

Clear-Com’s IP technology is robust and powerful, providing low latency intercom communications with low-bandwidth requirements (less than 300kbps) between far-flung locations such as Santiago and Moscow. “The remote IP panels provide us with stable, consistent communication between our production headquarters in Chile and our crews in Russia for live broadcasts,” noted Ormazabal. “So not only is IP communications via our V-Series panels cost-effective and easy to provision, but you can count on it to be quick and intelligible.”

Functionally, Mega’s engineering technicians found it easy to add the V-Series panels to their existing Eclipse intercom system and to get those units located in Russia connected back via internet to Santiago. This was accomplished quickly thanks to the V-Series’ one-time configuration set-up, no matter how many times the Mega crews change their locations and internet connections at various stadiums. The result has been the same: Mega’s production crews have had no problems talking to their Chilean headquarters in real-time, and vice versa.

“We’ve been a Clear-Com customer for 27 years, and have been consistently pleased with the quality of the products that Clear-Com has provided us,” said Antonio Ormazabal. “Working with them and the company’s regional distributor, Rios y Cia, Mega has been able to fulfil its intercom needs time after time. “We look forward to putting the V-Series panels to their biggest test yet next year, when we cover the FIFA World Cup in Russia.”

“It has become a common practice among Clear-Com broadcast customers to add remote V-Series panels connected over internet to their main Eclipse and Eclipse HX intercom systems. Using these panels instead of a telephone line gives them the capability to communicate with different people and areas in the system, audio, director, master, etc., simultaneously. This makes their workflow faster and smoother, it is as if they were in the room next door,” said Joquebed Colin Lugo, Clear-Com’s Regional Sales Manager, Latin America and the Caribbean. “To play a key role in bringing the FIFA Confederations Cup from Russia to Chilean audiences, and the World Cup next year, is a very high honor indeed. After all, when it comes to FIFA football, everyone is watching.”