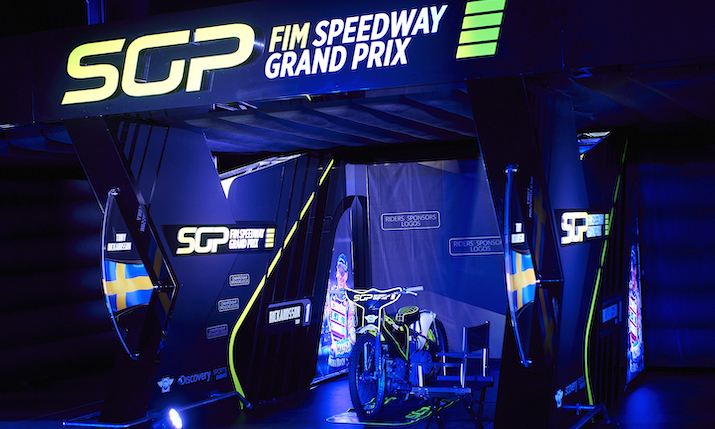 During the Speedway FIM press presentation on 1 October in Torun, Poland (Photo by Adam Nurkiewicz/Getty Images)

The Fédération Internationale de Motocyclisme (FIM) and Discovery Sports Events have revealed their vision for the future of speedway over the next decade. Marking the start of Discovery Sports Events’ role as global promoter for the sport, the organisations have unveiled a new Speedway Grand Prix (SGP) brand identity to run through the speedway pyramid, details of new event formats and an advanced event and television production setup.

The move is part of five key priorities under the new vision for speedway, including improving the year-round narrative of the sport with the riders at the heart, raising their profiles internationally; extending the distribution of the sport on both TV and digital platforms; enhancing both the at-event and on-screen experience to deepen engagement with fans; widening the global speedway footprint through new venues, more events and an extended season; and supporting juniors by connecting the next generation of champions to the sport.

From 2022, the extended SGP season will include 12 rounds over two continents and will feature 15 permanent riders and one local ‘wildcard’ entry per venue. To enhance the sport’s narrative and boost the fan experience, the action will be contained in one action-packed day. A format of 20 heats, two semi-finals and one final will take place during Saturday evening, with practice and qualifying moving from Friday to Saturday afternoon.

With the season running from April to November, three SGP2 events will be held (May, July and October), one SGP3 event (August) and a week’s bonanza (July) as fans can enjoy the SON and SWC on a rotation basis, as the summer gets in full flow.

Following a joint presentation ahead of the 2021 Ewinner Torun FIM Speedway Grand Prix of Poland, FIM president Jorge Viegas said: “After 20 years with BSI, I would like to take this opportunity to thank them for their professionalism, co-operation and friendship.

“Looking forward, I would like to welcome the new FIM Speedway Grand Prix promoter Discovery Sports Events. This is a long-term belief in a new promoter that presented us a long-term vision to develop this spectacular discipline over the next decade. Speedway has a huge potential to grow not only in terms of attracting a new generation of riders, but particularly in terms of reaching new territories outside of Europe.

Head of Discovery Sports Events François Ribeiro said: “After 20 months of preparations, we are excited to start our promoter journey as part of Discovery Sports Events’ new long-term partnership with FIM. Speedway has great foundations, a super fan base and we see significant growth potential. We won’t change anything to the nature of the sport. Speedway will celebrate its 100-year anniversary in 2023, but it is incredibly modern in its format: compact, spectacular, 100% in-stadium, Saturday evening primetime, something quite unique in motorsport to engage with fans.

“For the first time in its history, speedway at all levels will have a single international promoter, from grassroots-level up to pro-level. As Dorna and FIM have done remarkably well to build Moto 2 and Moto 3 as the MotoGP feeder, we will bring SGP2 and SGP3 junior championships to the SGP platform to train the best young riders and build a ladder for them up to professional level.

“Discovery Sports Events will benefit from the truly global scale of Discovery Sports to grow speedway’s global audience across discovery+ which will be become our premium Home of Speedway destination for fans, but also for Eurosport and domestic free-to-air channels owned by Discovery in key speedway markets such as UK, Sweden, Denmark, Poland, Germany. It is our ambition to grow the sport further and multiply the current SGP global viewership by five times within the next three years.”

Ahead of the 2022 season, a wide range of innovations will be unveiled to heighten the experience of fans – both at the venues and watching on-screen – and bring them even closer to the action. Advanced event and television production will see a new setup at races, including new pit boxes, TV studios and Fan Zones and a new central stage in the heart of the action. An advanced SGP app will also be available.

During the official unveil, FIM and Discovery Sports Events also announced that speedway legend Tony Rickardsson will become the first SGP Global Ambassador. The six-time FIM SGP World Champion and most successful speedway rider in history will add his unrivalled experience and support the develop of the sport. Starting immediately, Rickardsson will advise Discovery Sports Events and support all facets of the sport from SGP to the junior categories of the sport and its young riders.

Rickardsson said: “I’m glad to give back something to the sport I love, and support Discovery Sports Events in its new promoter role. My aim is to ease the access of speedway to young riders and make SGP an even more remarkable competition. I will put my experience, my energy and enthusiasm in the new role and look forward to bring speedway into a new golden era.”

In October 2020, FIM agreed a long-term partnership which will see Discovery Sports Events promote FIM Speedway events globally for the next 10 years. The new agreement begins in 2022 and builds on the existing partnership between the organisations for the promotion of the FIM Endurance World Championship (EWC) since 2015.

Discovery Sports Events will oversee the full operational and commercial aspects of the sport including multi-platform rights management and distribution, broadcast production, sponsorship rights strategy and the full suite of marketing, brand and promotional activity. It will also work with local organisers on promotion and maximising ticketing, hospitality and fan engagement.

Discovery Sports Events, previously Eurosport Events, has a 15-year heritage of growing some of the most popular motorsports series in the world – including the WTCR – FIA World Touring Car Cup and Pure ETCR, the world’s first all-electric touring car championship that will upgrade to the FIA eTouring World Cup from 2022. Launching in 2023, it will also promote the FIA Electric GT Championship, a new long-term platform for manufacturers to showcase their flagship GT cars and innovative technologies.