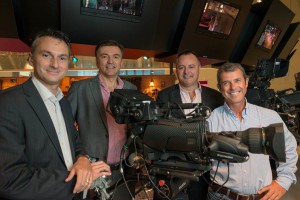 UK outside broadcast specialist Telegenic has bought eight channels of Sony HDC-2500R system cameras in a two-year nought percent finance deal brokered by Fineline Media Finance. The company is using the new equipment for a range of OB projects, including HD coverage of rugby union for BT Sport.

The £385,000 deal was confirmed at IBC 2013 and is the second sale of broadcast equipment to Telegenic involving Fineline. It follows a contract made in May for EVS XT3 servers, which were installed in Telegenic’s 4K T25 truck by Sony Professional’s systems integration division. As Sony’s preferred financial services provider Fineline is able to offer nought percent for 24 months on a variety of Sony Professional products.

The HDC-2500s were supplied by Sony dealer WTS Broadcast in a deal put together by sales manager Duncan Payne. Telegenic has increased its capacity this year to handle new contracts. Key among these is coverage of Premiership rugby union for BT Sport.

“We’re delighted to work with Telegenic again and to have closed what is sure to be the first of many deals under the new Sony nought percent finance scheme,” comments Gareth Wilding, sales and marketing director of Fineline Media Finance.