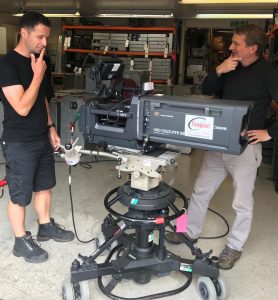 “The HDC-4800 is a studio camera system capable of shooting 4K/UHD at up to 8x or full HD at up to 16x,” commented Richard Baker. “It is a very high-end product with a price point upwards of £250,000 and a wide feature set. In Sony’s own words: ‘This is the future of live production, designed to satisfy the storytelling aspect of modern sports production.’ Deliveries began in mid 2017 and, after careful preliminary evaluation, we invested in a complete system for our hire fleet ahead of the FIFA World Cup in Russia.”

“Build quality of the HDC-4800 is excellent,” added Finepoint Broadcast’s chief engineer, Andy Mackenzie. “The camera is highly robust both externally and internally with a commendable uniformity of components right down to board level. Spares availability is good if or when replacements are needed. Sony runs a very efficient online ordering service for spares with fast delivery. Maintenance access is straightforward but, it should go without saying, anything more ambitious than superficial cleaning is best left to experienced service technicians. In summary, the HDC-4800 is an excellent camera system well matched to the needs of today’s HD world while at the same time being 4K future-proof.”

Core notes from the presentation can be viewed or downloaded from the Finepoint Broadcast website at https://www.finepoint.co.uk/pdf/Webinar%204800.pdf