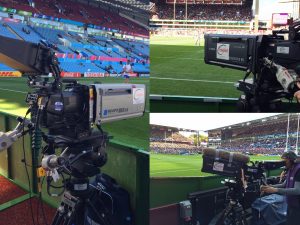 Finepoint Broadcast’s hire division has reported that 2018 was one of its most demanding years yet, with continued acceleration in demand from outside broadcast companies for its production equipment rental services.

Commented Finepoint Broadcast hire manager, Clive Northen: “2018 was one of the busiest years on record in terms of sports broadcasting, not least among our established client base and in terms of new business. We supplied high end production equipment to OB companies covering a wide variety of projects including large scale events such as the Commonwealth Games in Australia, the World Cup football series in Russia and the Asian Games in Jakarta.”

He went on: “2019 promises to be just as busy for all our customers with four high profile sports events. The Cricket World Cup will be held in England and Wales from 30 May to 14 July. This overlaps with the Women’s Football World Cup in France, followed in turn by the 2019 Rugby World Cup in Japan and the Southeast Asian Games in the Philippines. We will be providing equipment for each of these very large projects in addition to supporting regular annual events in the UK-based sports calendar.”

Finepoint, which claims to be the UK’s largest supplier of EVS production systems for hire, offers the EVS XT3 8-channel and ChannelMAX servers, as well as the EVS XTVIA which can handle up to six channels of 4 -UHD or 12 channels of Full HD 1080p, as well as supporting HDR.

Added Northen: “We have experienced particularly strong demand for EVS servers which we have been supplying together with Sony HDC2500, HDC4300 and the high end HDC-4800 cameras plus a variety of Canon lenses.”

“Hiring gives our customers the ability to scale up for big events without incurring heavy capital costs,” Northen said. “They are also able to use latest generation products that they are thinking of buying before taking the plunge into extending their own capital investment. Hiring is also a significantly safer option at times of economic uncertainty, not least in providing a shield against price fluctuations caused by changing currency values.

“With various events taking place on a global scale, we find ourselves working tirelessly with our clients to assist in the logistics planning of moving equipment around from one event to the next. Booking kit out to one client and then moving it for the next project requires a lot of experience and careful planning, plus the proven excellence of the Finepoint Broadcast technical support team,” Northen concluded.

Finepoint Broadcast operates in the UK from its head oﬃce in Kingswood, Surrey, and a sales oﬃce located at Pinewood Studios. Finepoint has been supplying broadcasters with a wide range of production and OB equipment since its establishment in the 1970s, complemented by a unique blend of exceptional service and extensive product knowledge.