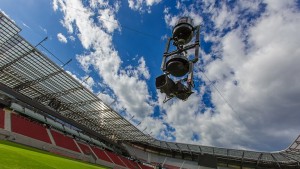 James Milner’s penalty to put Liverpool in front against Manchester United on Sunday January 15 at Old Trafford was the first Premier League goal to be captured by Spidercam. The technology was initially used to provide an angle of Paul Pogba’s handball leading to the penalty, and then lined up just above and behind Milner as he slotted the ball to the right of David de Gea in the United goal. Zlatan Ibrahimovic grabbed a late equaliser for Man United as the game finished 1-1.

The Spidercam system was installed by Sky Sports immediately following Man United’s 2-0 victory over Hull in the EFL Cup on Wednesday evening. According to Sportsmail, which first revealed the use of Spidercam last week, ‘Spidercam is a camera suspended above the pitch via four wires attached to each corner of the ground and maneuvered by an operator to follow the action, fluctuating between 10 and 40 metres above the pitch, and had to receive approval from the city council last Monday.’

Sky Sports head of football Gary Hughes said before the game: “It is an unmissable Super Sunday and Sky Sports will pull out all the stops to create the best possible experience for our viewers. Spidercam for the first time, all our biggest names giving their views on a massive afternoon; it will be what everyone will be talking about on Monday — including Thierry and Jamie on a Monday Night Football special.”