With London set to host the inaugural FIFA eNations Cup from 13 to 14 April, the Football Association (FA) found itself with just six weeks to pull together an eSports competition that would decide the composition of England’s first eLions line-up. 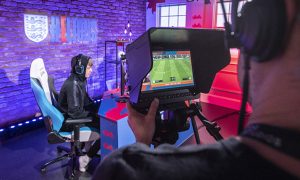 Esmond Blake, senior manager for commercial strategy at The FA, has been looking into the feasibility of an England eSports team over the last six months, so the area has been on the FA’s radar for some time. The FA has waited for the perfect opportunity to get into the game.

Damien Cullen, senior video manager at The FA, told SVG Europe: “We’re always trying to find ways to be innovative. The FA wanted to own its entry into eSports.

“FIFA sent an invite six weeks ago asking if we wanted to take part [in the FIFA eNations Cup]. From there, we quickly looked at whether we wanted to outsource this broadcast or own it, and we decided we wanted to own it, while collaborating on the project with ESL. It seemed like a good point in time to [get the FA into eSports]. It was a great opportunity,” added Cullen.

At the time of the announcement of its participation in the FIFA eNations Cup, Mark Bullingham, chief commercial and football development officer at The FA, said: “This presents an exciting opportunity for Three Lions fans to help form a new chapter in England’s history and add a 29th side to our current stable of national teams. The FA prides itself on being a modern, innovative organisation that strives to engage and inspire all generations of football fans. FIFA 19 is played by hundreds of millions of players daily with many selecting our male and female players so we have a great chance to engage with these as part of our efforts to continue to grow the game in England.”

On 1 February 2019 FIFA invited the FA to put forward a team, launching Cullen into action to put together an eSports event to find the two champions to go forward on England’s behalf with the clock ticking. FIFA’s deadline for submitting a team was 31 March, however The FA made the decision that if it wanted to do a broadcast, it was best to do it before the men’s senior team met up on 17 March. 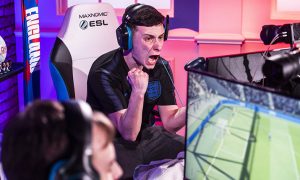 With FIFA setting a short deadline for the eNations Cup, Cullen had a time restriction that had to be worked around. However, Cullen said the FA wanted to make sure it broke into the eSports arena in the right way. He explains: “We were aware of eSports and that it was growing, but we didn’t want to look like the old boy with his cap on at the party; I didn’t want to see a load of comments about ‘why are you doing this?, ‘why are you trying to be cool?’. We’re a massive organisation and our remit is to get people involved at all levels [of this sport]; it’s a lot to look after. eSports has always been on our radar, but I wanted to find the right opportunity to take part in it, and we definitely thought this was the right time and opportunity. The gaming community cares very much about this.”

Adds Cullen: “This isn’t a one-off event; this is the start.”

Cullen went first to Alex Pettitt, technical consultant for the FA’s video team, who he had first worked with on the FA’s Lions’ Den daily show, which was exclusively live from the England camp in Russia during the 2018 FIFA World Cup. “The key to this was Alex, and a central London studio,” notes Cullen.

The biggest challenge for this project was time, Pettitt says: “This came to us late in the day on a very tight turnaround. But I knew even though time was tight, it was doable.” The first conversation between Cullen and Pettitt was on 26 February, and their first face to face meeting about it was the next day.

eSports organiser and production company, ESL, was bought into handle the gaming expertise for the event. In preparation, ESL invited four seeded gamers to take part in the event (two on Xbox One and two on PS4). Meanwhile online qualifiers held over the weekend of 9 and 10 March had total sign-ups of around 750 people, ready to compete on either Xbox One or PS4. Two winning players per console went forward to fight against each other and the seeded players just four days later.

While The FA handled the look and feel of the final tournament to find the ultimate eLion champions, Pettitt notes that the first question he had faced was whether to build a custom studio at Wembley for the day of competing to find England’s eLions, or to find a studio in London that The FA could work with. Due to time restraints, the latter was decided upon as the plan of action and the team found TOG Studios, a fully flexible, all-inclusive production studio based in Marylebone, London.

Pettitt is fully versed and an ardent fan of Blackmagic Design’s production technology, and in order to run the event on 14 March he needed to get additional kit from Blackmagic to create the look and feel of the broadcast required bv the FA. Pettitt says: “We reached out to Blackmagic, who allowed us to use its higher end stuff.” 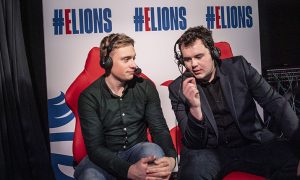 On the assembly of new ATEM kit, Pettitt commented: “We wanted a three box set up on screen during the competition, so you can see all the gameplay on screen at the same time, as well as player reactions. Blackmagic allowed us to do that. With those three bits of [new ATEM] kit, we had a powerful technology solution in the gallery that allowed us to do what we wanted.”

Blackmagic cameras used for the eLions event included six units: one URSA Mini Pro; two Studio Camera 4K; and three Micro Studio Camera 4K (used as gamer cams). Adds Pettitt: “We used a six camera set up, and utilised Blackmagic’s Micro Studio Camera 4 as it’s good for gamers and commentators; it’s not too intrusive, but it’s very clear. We stuck ultra wide lenses on them – 7mm – so we could sit within a few feet of the gamer, but get a wide view to see the England branding, from a poster wall of key England team moments, to a subtle scarf over the back of a chair.”

On Thursday 14 March, England’s first eLions were confirmed after a day of tense gaming at TOG Studios. Ultimately, Donovan ‘F2Tekkz’ Hunt (number one player in the world,) and Tom Leese (from the online qualifiers,) won on the Xbox One and PS4 categories respectively to become England’s first eLions. The two winners will be official England players until July 2020.

Viewing figures for the eLions tournament were consistently around 450 to 800 viewers at any one time, says Cullen.

Concludes Pettitt: “Certainly this was a learning exercise to see what works, what does or doesn’t need to be prominent in a broadcast. We need to see what people were watching, when they dropped off, when they commented on YouTube “bring in the next game now!” and all that.”

FIFA has now confirmed the full line up of participating countries that will compete at the first-ever FIFA eNations Cup. As one of the major events in the EA Sports FIFA 19 Global Series, the FIFA eNations Cup is a new addition by FIFA to this season’s professional eFootball calendar and will feature 20 national teams from all six confederations (Concacaf, CONMEBOL, CAF, OFC, AFC and UEFA).

In addition to international glory and a prize pool of $100,000 at stake for the teams, players selected by their member association for the FIFA eNations Cup 2019 will also have the chance to win up to 1,500 EA Sports FIFA 19 Global Series points, providing them with an opportunity to move up the FIFA 19 Global Series Rankings and take a step forward on the Road to the FIFA eWorld Cup 2019 in August this year.

In addition, London has also been confirmed by FIFA as host and the tournament will be broadcast by the Media Rights Licensees for the event. It will also be streamed live across FIFA’s digital channels on 13 and 14 April 2019.

Christian Volk, director of eFootball and gaming at FIFA, said: “With 20 of the world’s best eFootball nations going head-to-head, this year’s inaugural FIFA eNations Cup will provide another great example of the passion and excitement that eFootball has to offer, as well as providing the chance for players and member associations to compete for national pride and international glory.

“Following unprecedented interest received in the event, the decision to expand the FIFA eNations Cup from 16 to 20 teams will allow more member associations with a chance to compete at on an international stage in eFootball, as well as providing an important stepping stone for FIFA to continue growing and developing eFootball and the FIFA eNations Cup for member associations and the wider eFootball community in the future.”

As part of the format of the first-ever FIFA eNations Cup, participating countries and players will compete in individual (1v1) and team (2v2) matches on both Xbox and PlayStation during the group stage, with the top two nations in each of the four groups progressing through to the knockout stages.

Volk concluded: “Following the successful implementation at the recent FIFA eClub World Cup last month, we are hugely excited that the 2v2 team format will return and be part of the first-ever FIFA eNations Cup. The new 2v2 match format is another important innovation for the sport of eFootball this season and will add further drama, as well as another dynamic, to the event during what will be an exciting two-day exhibition of some of the best eFootball in the world.”