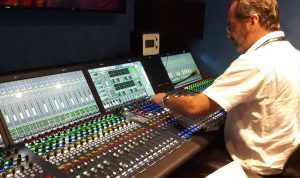 Counting the BBC, ITV, Channel 4, Warner Music and Sony among its regular clients, UK-based location recording and production company Floating Earth operates a state-of-the-art OB truck alongside its in-house post-production suites and mobile facilities. A recent upgrade of the truck’s mixing and routing facilities has seen it replace another leading console manufacturer’s system with one from Lawo.

The purchase was prompted by Floating Earth’s wish to upgrade the truck to reflect the changing nature of its assignments. In particular, the company is seeing track counts continually increasing, and 96kHz recording is becoming more commonplace.

After evaluating several alternative solutions in the search for a compact, scalable and flexible solution, with RAVENNA connectivity and the ability to support its own stageboxes, the order – for an mc²56 mixing console with five mxDSP Cards and Nova73 Compact router – arrived with Lawo in September 2018, with the installation commissioned at the beginning of November.

The mc²56 console is available in five different frame sizes to meet the needs of smaller outside broadcast vehicles, with as few as 16 faders or up to 80 faders for more complex applications. Larger studio and theatre demands are met by the mc²56XT models, which provide from 48 to 144 faders in a high-density dual-fader layout. For the Floating Earth truck, a 46-fader console was deemed most appropriate.

The Nova73 Compact has a capacity of 5120 x 5120 crosspoints and carries up to ten I/O slots that can be equipped with MADI, ATM or RAVENNA interface cards. Alternatively, the same slots can be assigned to two AES3 cards for up to 64 AES channels. Floating Earth’s preferred configuration required two MADI Cards (4-port and 8-port), two RAVENNA Cards and an AES card.

An additional appeal of the mc²56 was the implementation of its copy-and-paste functions, which Floating Earth found to be “natural and powerful”.

Floating Earth settled on a Lawo solution based on quality and flexibility, and because the operational philosophy was a natural fit with the company workflow.