Following Giro D’Italia…“but not by bicycle!” 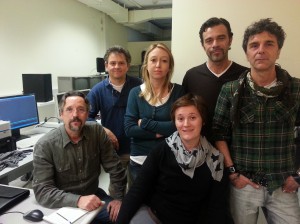 While the graphical themes for the 2013 edition were produced by Zampe Diverse, previous recent years’ graphics for the Giro D’Italia were produced by the Graphics Department RAI Milan, overseen by Marco Denna, head of post-production video, graphics and RVM. This year they were engaged in the creation of several RAI Sport graphics signature themes like ‘Giro Notte’, ‘Anteprima Giro’ and many more.

Among the operators who follow sports programmes on RAI Sport 1 and 2 are Carlo Bonacossa, who has handled design and coordination of live graphics for major events such as the Beijing and London Olympic Games, the Paralympic Winter Games in Vancouver, and the World and European Cups.

Pivotal to the Giro D’Italia effort, meanwhile, have been Adriano Longo, Adriano Longo, who oversaw the design and implementation of 3D maps (2003-2012), and Corrado Traverso, who was involved in the conception and graphic design of Giro D’Italia (2010-2012) and the customisation of graphical themes for the Tour of Italy 2013.

Traverso tells SVG Europe: “For the Giro many things need to be optimised near the start, but for twenty days, under a lot of stress, in many remote locations, live for many hours, in the sun, the rain and the wind, in the mountains, the plains and in the city…everything has to work at full speed.

“I’ve been working within the Department of Graphics of RAI Milan for ten years following the Giro, but strangely not on a bike! The first year I watched old cassettes on the history of the Giro to understand what it was for, what kind of caption would be required, what was missing in the end, the rankings of the various races and much other information besides. Then I tried to identify them with different colours. Subsequently, I asked the director, Nazareno Balani, to specify his requirements.

“Other demands related to the different graphics themes contained in the Giro, up to eight as ‘Preview Giro’, ‘Tour Live’ and many others each needed coherent customisation. In the past these signature graphics themes were about 30 seconds long; this year they were much shorter.

“After that, each time, the music consultant was asked to find or create from scratch the music suited to the sample of the theme. After completion, the entire graphics plant was exported to EDB (European Broadcast Development) graphic workstations in the form of guidelines for the playout during the Giro.”

EBD is a very important company in the area of digital media, with headquarters in Cologno Monzese and interests in various areas of broadcast. Their role in Giro D’Italia in 2013 was concerned with airing all graphical materials, but not in the creation of the content itself since this year this was commissioned by RCS Sport (the rights owner) from an external company, Zampe Diverse.

Traverso continues: “Some graphics contributions have always been aired using BLT machines and frame synchronizers, so [are] not re-calculated but transmitted straight from Digital Betacam, or IMX, tapes or loaded on BLT hard discs. Sometimes for the transitions a TGA sequence was created and then loaded onto the memory of the video mixer to be used during play-out.

“Further requirements may arise on the field, such as when new captions are requested by RAI Sport. These are created in the RAI production centre and conveyed via FTP or email.

“In practice, Giro D’Italia begins long before the race itself with a long period of preparation. This year, the arrangements were different than in the past since RCS Sport was directly in charge of the production of all the graphics on the air. RAI was engaged in the creation of RAI Sport signature themes like ‘Giro Notte’, ‘Anteprima Giro’ and many more.”