Innovative football and eSports club, Hashtag United, is growing its digital audience with Grabyo, to enhance video production and delivery across social media.

With a rapidly growing global fanbase, Hashtag United, which is based in Essex while its ‘live’ team plays in Tottenham, London, has partnered with Grabyo to enhance its digital production. 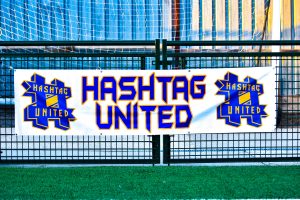 Hashtag United is no ordinary sports club. Founded by Spencer Owen in 2016, Hashtag United became famous for filming its matches and playing them on YouTube, is in the tenth-tier of English football, has played in front of 35,000 fans at Wembley Stadium, and built a successful FIFA esports team, with four players competing at the very highest level and has appeared in FIFA 18, Top Eleven, and now FIFA 19.

By placing all things digital and relevant at the heart of its strategy, the club has won over 620,000 global fans across YouTube, Twitter, Facebook and Instagram in just three years, with a sizeable following for its football team.

Using Grabyo’s browser-based production tools, Hashtag United is taking its digital video to the next level, delivering video content to existing fans and reaching new ones. The club will live stream its commentary team and deliver real time highlight clips to social media during select football matches, while looking to serve eSports fans with live streams, tutorials, pack openings and behind the scenes content from major competitions.

On how Hashtag intends to balance its digital video content to grow its fanbases for both ‘live’ football and esports, Neil Smythe, head of operations at Hashtag United, commented: “We are a small business with limited resources so prioritisation is key. At present, we prioritise our digital audience over growing a live fanbase, not least because our sustainability relies on the reach and engagement of our digital fans rather than ticket revenue. We use social platforms and tools like Grabyo to engage fans globally with relevant, enhanced content such as live matchday streams.

“That said, our live fans have played a huge role this season and we are doing what we can to grow their number,” continued Smythe. “Our ticket prices are the cheapest allowed by the league (£4 adults, £2 concessions and free for U12), plus we offer regular prize giveaways, fans are regularly involved in our content, can always meet the team and recently we even ran a competition for fans to play Teqball against Robbie Savage on BT Sport!” 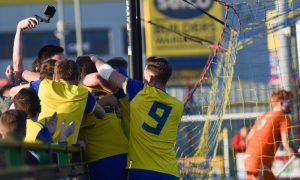 Hashtag United celebrate a goal and film it for the fans [Photo credit: Touchdown Photography]

He went on: “Our attendances home and away have often been the highest in the country at Step 6; we welcomed almost 500 at home on Non-League Day and saw over 700 at Benfleet over Christmas. We’re pleased that our away attendances have boosted gate receipts for other teams in the league as this is often a club’s lifeblood.”

In terms of an eSports audience, Smythe stated: “We are embarking on a new content strategy to grow. We’ve recently launched an eSports-specific YouTube channel and are currently piloting on Twitch, which should allow us to shine a stronger light on our FIFA team who are amongst the best in the world! We do also blend the two worlds whenever possible to help engage the audience; two of our FIFA players play football and regularly star in our Sunday League content.”

Gareth Capon, Grabyo’s CEO, commented on how important is it for clubs, especially small ones, to be innovative with their digital strategy: “It’s critical for smaller football clubs to continuously innovate their digital strategies. Football fans today are ‘always on’; they want access to their club at all times. Without ensuring fans can engage with the club through content on the platforms and devices they want, at any time, it’s impossible to grow and attract new followers. Modern football fans are interested in much more than the 90minutes on the field and this means digital platforms and social apps have a key role to play.

“Hashtag United have demonstrated how small and local clubs can capture younger fans either choosing a team to support or adopting a ‘second team’. Younger fans are drawn to innovative content across social media; this builds more of a connection with them than digital media ever has done in the past. Digital platforms allow a direct relationship with fans which bypasses traditional media, this means smaller clubs can tell their own stories,” noted Capon.

Small clubs are in a competitive sports media market, Capon said. He said that while, “big teams will always grab the headlines, and get a lot of attention from broadcasters and the media,” he added that, “we are seeing a generational shift to digital media consumption – a more level playing field”.

“Anyone can reach their target audience as long as they deliver quality content at the right time, and in the right place,” Capon concluded.

The nature of Hashtag United’s set up required a flexible solution to allow the club to deliver high quality video content without the complex infrastructure of a traditional broadcast system. Grabyo’s cloud platform only needs a web browser and an internet connection, enabling Hashtag to operate from the stands, home and away, using only a small team with a laptop, camera and microphones.

The collaborative nature of the platform allows a small team to produce the video on site while other members of the team can contribute remotely, accessing the content and production services from anywhere in the world.” Grabyo offers advanced streaming features, such as real time graphics, and fan interaction tools with native live polls and comment displays, and data integrations offering lots of options for partners. Capon added: “Making the live experience work for the fans, on mobile screens and social apps, is something we work closely with partners on; engagement is the goal for everyone involved.”

Spencer Owen, founder of Hashtag United, commented: “Our partnership with Grabyo reflects a strategy that has always been crucial to the success of this club. We put our fans at the heart of everything we do – they are as much a part of our club as anything else. Whether it’s the football team, or on FIFA, we want to give our fans access to everything we do through our social channels. We create real connections with our fans on social media through our content, making sure they feel involved in what is such an exciting time for the club.”