Football managers get their kicks with Piero FC 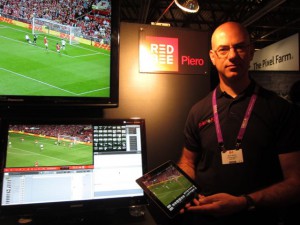 Karl Stone, football club consultant for Piero FC, is at the Hego stand (6.C19) helping football coaches and players bring the same advantage play-by-play analysts have when it comes to analysing play: interactive graphics that can easily respond to touch controls, help players understand what they are doing wrong, and, hopefully, help them learn how to do things right.

“If the pundits are able to do it on TV, why not us?,” says Stone of the reaction of managers to a system that allows them to freeze a frame of video and move players around the screen like chess pieces to show proper play. Two teams in the English Premier League, Fulham and Liverpool, have signed on for the system.

“We already have lots of data but with this the manager has a means of presenting data to players with video and they can stop at any point and do things like place a spotlight on a player, draw arrows, or move them,” says Stone.

A big advance for managers is the use of the iPad. The previous interface was a touchscreen monitor that required wires and cables. But now the iPad allows for managers and players to easily hand the device back and forth and also learn how to use it more quickly.

“There is a great market opportunity and it has been very well received in all the clubs,” says Stone. “For pre-game scouting, post-match analysis, and for training of academy players it is invaluable.”

It also leads to more honest assessment of a players performance when coupled with the virtual camera application that allows the user to virtually be placed on the field of play and see what they player saw at a given moment.

“When the player says they didn’t see something you can use the virtual camera to show them what they really saw,” says Stone. “If they are stripped of the ball and say they didn’t see a player you can recreate what they saw [and make sure they are being honest.]”