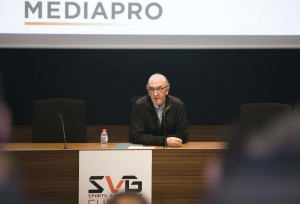 Despite the many and varied changes affecting Spanish football coverage, Roures said that “we still believe that the producer is the one who has a global vision of everything, of any event, and that’s what makes it possible for the event to become reality… to come together if you like. And it is within that global vision that we find the reason for our work, how we enjoy ourselves and how we find fulfilment.”

Reflecting on Mediapro’s association with Spanish football per se, Roures said that the company “sees it as a business where the viewers, subscribers or regular man on the street who watches football in a bar are just as important as the Liga as an institution or as the TV operators. I believe that even though we were a small production company [at the time we became involved with La Liga], this is what allowed us to work together with the football clubs and the Liga to explain our vision of this business, and how we were able to offer much more [to them].

“We have always believed that the clubs had to be involved in the day-to-day [business] of rights trading, and to shoulder the responsibility so that the whole show would work [effectively]. [Then we] could support them in the operation of the business within this global vision.”

Roures went on to explain the extensive nature of the current relationship with La Liga, encompassing TV rights and production, an “economic interest grouping”, and the generation of much additional content for social media platforms like Twitter and Facebook. He also highlighted the scope of the innovative La Liga second screen app, and the Internet-based TV channel La Liga TV.

The business continues to evolve and expand. The La Liga YouTube channel now receives more than 130 million views per month, while a new initiative dubbed La Liga World Challenges is a three-year project in which La Liga “sends clubs to play matches abroad as part of an operation associated with Spanish companies which are present, or which are vying to establish a presence, in specific locations around the world.” Trips have also been arranged to provide representation for sports such as badminton, women’s hockey and synchronised swimming.

Roures also discussed Mediapro’s agreement with La Liga to combat piracy. “Spain is the second country in the world in terms of audiovisual piracy, second only to China, just to give you an idea of just how important we are as a country…! We’ve undertaken a major study in conjunction with a company that specialises in the field of football piracy. With regard to cinema and TV series, there is some, not much, protection. However, for football, there is nothing because intellectual property rights are not recognised for football. Last season 138 million games were pirated in the La Liga competition, just to give you an idea of the economic scope of the problem. The Government does not take the matter seriously because as far as they’re concerned, the only way to fight piracy is from La Liga itself, from the clubs, operators and suchlike. The issue is as major as it is because the websites that encourage piracy are very important and, in general, one thing we have discovered is that the advertising placed on those sites is from big name brands. Therefore, part of the fight against piracy is to convince brands that they must not be generating revenue for, and thus breathing life into, these illegal sites.”

Looking forward, Roures revealed that Mediapro is involved with the development of a proposal about piracy to be presented to the European Commission, and is also jointly developing a product to furnish every stadium in Spain with WiFi.