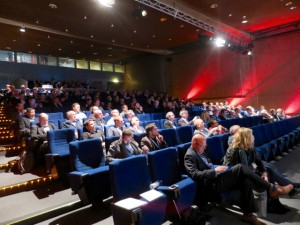 IP, 4K, UHD, VR and more: all under discussion at Football Production Summit 2016.

Despite the international situation following the terrorist atrocities in Brussels on the morning of 22 March, the latest edition of the Football Production Summit – which took place in Paris on the following day – attracted some 200 broadcast and sports professionals to the Stade de France to find out more about current developments in football production technologies and techniques.

An integral part of the annual SVG Europe calendar, Football Production Summit provides a valuable for broadcasters, OB providers, federations, leagues and clubs to discuss the latest developments affecting coverage of the sport. The 2016 edition featured a detailed preview of the broadcast preparations for EURO 2016, as well as explorations of match-day acquisition, OB production, pitch-side innovation and studio content presentation for top-end and lower-cost football shows.

Detailed reports of individual sessions will appear on SVG Europe over the next few days, with coverage of the EURO 2016 presentation already available here (https://www.svgeurope.org/blog/headlines/football-production-summit-2016-uefa-discusses-broadcast-preparations-for-euro-championships/).

“We are delighted that so many people chose to join us last week despite the uncertain international situation for what was perhaps the most technologically far-reaching edition of the Football Production Summit yet,” says SVG Europe managing editor David Davies. “From IP to UHD to VR, it is clear that the workflows supporting coverage of the sport are undergoing profound change. Many of these technologies were discussed in revealing detail in Paris last week so we look forward with no little anticipation to see what impact they have on football production over the next 12 months.”