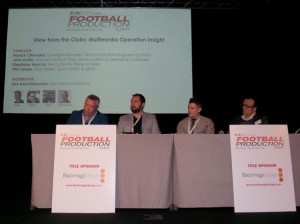 The discussion entitled ‘View From the Clubs: Multimedia Operation Insight’ at last week’s Football Production Summit in Paris delivered some interesting clues about how to keep the fans engaged once the live game is over.

Senior systems and operations manager at Arsenal Football Club, John Dollin, explained how the club works as a media entity, providing additional content for the 100 million Arsenal fans worldwide, whether on Arsenal.com, the ArsenalPlayer or on mobile apps. “We have to be seen to turn in a profit,” he said. “We employ 37 people, including production managers and engineers in the edit suites who make sure that all the channels are consistent in look. Our video platform delivers 120 hours of content on a monthly basis, both short and long form. We can’t show live football, but we do produce a lot of half-time footage of players. We are unashamedly pro-Arsenal in our coverage because that’s what the fans want.”

The business model is based on getting new sponsors onboard: fans get all the additional Arsenal content for free, and the site and other screens are not encumbered by advertising.

Stéphane Hourcq, head of sales at Netco Sports, a Euromedia subsidiary which develops apps for sport enthusiasts, spoke about some of the company’s products: “We work with broadcasters and football clubs as well as the leagues and different federations. We have developped an app called PSG fotofan, for instance, which enables fans to take photos of the players and personalise them before posting them on social media.”

The tendency is for the games to become wider entertainment events, even if there is still some way to go for some clubs. According to Ross Video Sport’s Phil Ventre, some stadiums – such as Anfield in Liverpool – don’t yet have big video screens. “The younger generation – my two daughters who are 9 and 11 are an example of that – want a much wider entertainment experience than we grew up with. The fun is not only on the pitch but on all the other screens, and they kind of expect that,” he stated.

It was suggested that English football clubs, however competitive they might be on the pitch, often share best practice ideas when it comes to finding new forms of content to keep the fans happy. But according to John Dollin, sharing information only works in the UK. “UK supporters will stick with their club no matter what. But abroad, fans are more fickle and you will find that there is a lot of competition between the clubs to keep them engaged,” he noted.