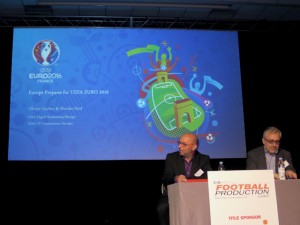 The latest edition of SVG Europe’s Football Production Summit commenced with an in-depth examination of the organisational set-up and broadcast workflow evolutions being put in place for the EURO 2016 Championships, which are due to commence on June 10. The revealing presentation was given by UEFA digital media solutions manager Oliver Gaches and TV transmission manager Nicolas Deal.

The 2016 event will be the third to be held in France, following tournaments staged in 1960 and 1984. The first edition of the Euros to be contested by 24 national teams, EURO 2016 will feature 51 matches played in a grand total of 10 host cities. While the actual ‘physical’ attendance is expected to surpass 2.5 million, the global broadcast viewership will be on another level altogether; to wit, the 2012 championships attracted more than 8.1 bn viewers.

Outlining the extent of the host broadcast operation for EURO 2016, Gaches and Deal revealed that it will serve no fewer than 238 territories and 120 broadcasters. Host broadcast staff will number 1,900 staff, while some 2,000 hours of production are set to be logged during the tournament. Meanwhile, 71 broadcasters are due to work out of the IBC, which is located in the Paris Expo Porte de Versailles.

The pair went on to document the production concept for the host broadcast operation at the 2016 championships. Primary tenets of the concept include a cross-competition approach, extensive consultation with the wider broadcast family, extended coverage (pre-, post- and in-tournament), and comprehensive quality control.

All matches will be produced in HD 1080i/50, with 16:9 true graphics, English guide commentary, and Dolby 5.1 surround sound encoded on LSF (live stadium feed). A total of five production teams will be involved, with each team covering two venues (Paris/Saint Denis, Lyon/Saint Etienne, Lille/Lens, Bordeaux/Toulouse, Marseille/Nice).

For the group stage and camera quarter-final matches, a 46-camera total will be the standard, comprising 38 match and 8 additional cameras. These ‘extras’ will include one additional mini-camera behind each goal, a remote robotic camera in the players’ tunnel, and a remote robotic in the press conference room, among other locations.

Gaches and Deal also gave some details of the EURO 2016 IBC. Alongside the Master Control Room (MCR) and Commentary Switching Centre (CSC), the premises will feature UEFA HB production areas, a broadcast technologies showroom, general offices, and essential service outlets such as a post office and restaurant.

The presentation was rounded out with detailed information on the transmission and distribution plans for EURO 2016 – which in totality is evidently set to be the most ‘connected’ and comprehensive edition of the tournament to date.