The success or failure of the Video Assistant Referee (VAR) system will not be decided by technology but by football’s ability to overcome communications issues with fans and TV viewers.

That was one of the conclusions drawn by a panel at SVG Europe’s Football Production Summit in Paris where representatives from MediaPro, EVS and Ekstraklasa Live Park debated ‘How to Successfully Deploy VAR Systems Into Football,’ moderated by SVG Europe contributor Gert Zimmermann. 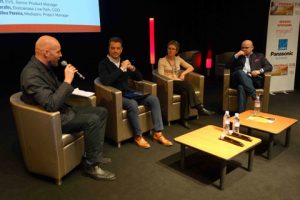 Speaking candidly about their experiences of VAR implementation, all three panelists agreed that technically speaking, VAR was not a huge challenge. But instead, it was being blighted by how the VAR decision-making process is relayed to broadcasters and to fans inside the stadium.

“If we don’t get fans of the game engaged, it will kill VAR,” argued Stéphanie Dessart, Senior Product Manager at EVS. “It’s not a matter of technology. It’s not even a matter of the decision. It is just a matter of communicating that decision with the people who watch it at home and, more importantly, in the stadium.”

Ekstraklasa Live Park Chief Operating Officer Marcin Serafin suggested that the communication should “be like in the NFL. The official decision must be announced. It would be much easier for fans and viewers,” he said.

Mediapro Project Manager Nuno Manuel Silva Pereira, who has worked on VAR deployments in Portugal, Mexico and Spain, noted that, in certain countries, announcing decisions to the crowd “could be dangerous” but acknowledged that the lack of transparency is a worry for VAR.

On the subject of communicating with TV, FIFA was praised for its decision to include a VAR quality control manager who can relay information to a match host broadcaster.

“FIFA added this person because they realised that the broadcasters didn’t understand anything of what was happening with the VAR,” said Dessart.

“So, it is being corrected towards broadcast already but I think if we want VAR to be truly adopted and accepted by the masses, we need to communicate it better in the stadiums. There has been testing in the FA Cup and League Cup in England. It was a disaster in one of the games because the first decision was made, rightly or wrongly, and was not communicated well. After that, every single decision from the VAR, which was seemingly correct, was booed because people inside the stadium didn’t have a clue was happening. This gave them a negative perception of VAR,” she said.

Serafin, whose company operates the VAR service for the Polish Football Association, suggested that this scenario is typical of a first implementation. “It was the same in Poland,” he said. “The first or second game, there was a lot of mess because no one knew what was going on. Each federation must go through these steps.”

Serafin, like Pereira, also highlighted the danger of showing pictures to sets of fans of rival fans inside the stadium who are likely to have vastly differing opinions of an incident.

“I cannot imagine that we will show the clips on the screens in the stadium because, for example, you cannot engage Borussia Dortmund and Schalke fans in the same stadium. Even if it is a clear situation, they will not see it the same way. I would be afraid of that. But verbal communication must be done,” he said.

IFAB, football’s rule makers, recently approved the use of VAR systems, paving the way for it to potentially be used at the 2018 World Cup in Russia.