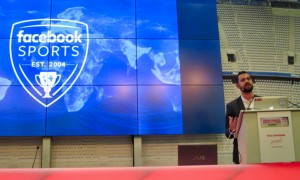 Last month at the SVG Europe Football Production Summit, Facebook EMEA partnerships manager Ronan Joyce took to the stage to offer up some top tips and strategies for getting the most out of Facebook and Instagram. The good news? If you are involved in sports, and especially football content creation, the popularity of the sport on a global level has pretty much set you up for social media success.

The use of video is increasingly an important part of the Facebook and Instagram experience as it drives more meaningful engagement. Joyce said that content creators should experiment with new production techniques, like using drones or even 360 video.

“Use it to excite and engage a mobile audience that can be different across the platforms,” he said. “Use it to build buzz and excitement.”

Some of his top tips include using social media during the broadcast window to drive viewership and keep fans engaged during commercial breaks; get the athletes and talent involved as much as possible because they are important drivers of connections (“tapping into them can go a long way”); use branded content to drive revenue; and think video first and have a consistent posting strategy with engaging content.

“Live production in and around the broadcast window really produces results,” he said. “And if you aren’t doing it someone else will and that is an opportunity you missed to drive people back to your broadcast.”

“Video is the content type most users want to see as it is more real and in the moment,” said Joyce. “Posting frequency and keeping the quality high is the key as the newsfeed is very competitive. But content needs to be authentic, engaging, and shareable because when people get engaged that drives greater distribution in the news feed.