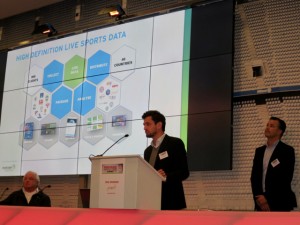 Increasingly, the challenge for stadiums around the world is to enhance the ways in which they communicate with their audiences, in order to both enhance the fan experience and extend the related commercial opportunities. Allianz Arena and resident club FC Bayern Munich constitute a case-in-point, and together they have taken countless steps over the last decade to boost engagement.

At SVG Europe’s Football Production Summit 2017, Bayern Munich’s Head of Digital Projects, Benjamin Steen, was joined by Daniel Dengl – Senior Key Account Manager at data and content partner Perform Media Deutschland – to discuss the continuing transformation of the Allianz Arena’s dialogue with its visitors. The scene was set by a brief introduction from Reinhard Penzel, Managing Director of Live Production.

Steen recalled that the latest cycle of work commenced in 2015 when his team reviewed the requirements of Bayern Munich fans and discovered two primary deficiencies in the current infrastructure – “WiFi and battery [charging]. Wherever you go – to a venue or at an airport – you see people searching for free WiFi. Everyone wants to be connected, and they are also often looking for somewhere to connect their smartphone [for charging].”

The overriding objective of Steen’s team is “to serve our fans, our clients and our visitors the best we can”, and so two years ago it realised a project with Deutsche Telekom to implement more than 1000 access points in and around the Allianz Arena “so that there is always a connection to our WiFi”. The initial arrangement was “perhaps a mistake” in that fans were required to provide name, email address and other data in order to connect: “People in Germany and in Europe are not too willing to give data just to get WiFi.” So now for connection users need only accept T&Cs on the landing page and they are free to browse. Instead, the focus of data collection has shifted to the club’s mobile app, where “users are generating more data and we make them register”. 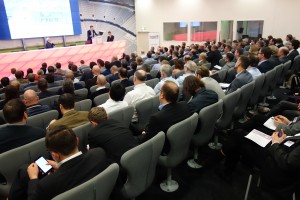 The second part of the recent project was the installation of more than 1200 screens across the site, allowing the club to display a wide variety of match-oriented and commercial content. “The mindset of sponsoring partners has totally changed” in recent years, says Steen, “and the stadium is now one of the main platforms that we are offering.” The new infrastructure is “very flexible” and can be used to relay all manner of commercial messages – “for example, we can have a [visual of a] Lufthansa jet] fly from left to right, or an Audi go from right to left” – as well as editorial content including player interviews, statistics and other relevant data.

‘Football and its needs are changing’

One of Bayern Munich and Allianz Arena’s crucial collaborators in this brave new world is Perform, which produces data and a wealth of content for the club. “Football and its needs are changing,” remarked Dengl. “On the one hand the matches are getting faster and faster, and each club has their own analysts, and then on the other you have new [systems] such as [player] tracking and goal line technology. Then you have the kind of infrastructures that we have here at the Allianz, [which satisfies the demand of fans] for interesting content, interaction…”

To help the Allianz move boldy into a fresh era Perform implemented a new system, dubbed Smart Sports Content, to effectively provide a hub for the new outlets and methods of distribution. Among many other features, “it allows us to create real-time graphics within seconds. It is a very easy tool so that everyone can handle it. We have a wide range of animated templates [that can be used as the basis for content] as well as the ability to customise layouts for clubs and broadcasters…”

On Bayern Munich match-days there is a “dedicated team creating display lists for the feeds with facts and stats”, although there is also a focus on contextualising proceedings with interviews, background material and other relevant content: “It is important to tell the story behind [the match].” Once created, content playlists can be affected by events on the pitch as “the system will automatically update if something is happening”.

As well as the extensive network of screens within the venue, the system is also feeding countless other outlets, including the mobile app and the FC BAYERN.TV service.

‘The best way to consume the product – football’

Collaboration with partners is evidently integral to making the most of the new systems. For example, a collaboration with radio broadcaster Bayern 3 makes it possible to send push notifications about local travel and parking conditions to users of the mobile app. As a result, people can be informed “about delays or closures on the highway, and be advised about alternative routes, as well as the parking situation at the stadium.”

With the app having been downloaded more than 5 million times, there is no doubt that Bayern Munich and Allianz Arena’s integrated approach to fan engagement and content distribution is resonating strongly with fans. But it’s an ongoing process and there are plenty of plans for the future, including a new headset that will enhance the match-day experience for attendees with visual impairments.