Football Production Summit: “Football Club media teams can do the best job in the world and still fail.” 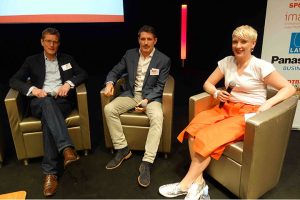 For producers of sports-related video content, having compelling match action to cover is hugely important, yet it is a factor that they cannot directly control.

Even with an unlimited budget, the best pundits and all the technology in the world, it can be very difficult to dress up a nil-nil draw.

But while this is true of just about any producer, very few media production teams are as dependent on the on-field action as those working for a football club.

As a completely partisan organisation, they rely heavily upon – and are often challenged by – the success of the team out on the field.

That is certainly the case at Arsenal FC where a defeat for the first team can put a stop to any media content plans, however good they might be.

Dollin is responsible for the operational management and product development of Arsenal.com, Arsenal Player and Arsenal’s mobile apps, as well as managing the club’s production and broadcast infrastructure.

During a session called ‘Football Clubs as Media Hubs: The Big Challenges’, sponsored by Imagen, he outlined the difficulties that the media team face, citing one particularly excruciating example.

“My team could do the best job in the world and still fail,” Dollin told the audience at the Stade de France.

“We could put a piece of content together and it still wouldn’t be aired. In 2014, we did a celebration of manager Arsene Wenger’s 1000th game in charge of the Gunners. We put a lot of effort into it. We even built a mobile app that was going to tell that story of the match, which was against Chelsea. And then the team went out and lost 6-0. That pretty much put a stop to everything. We couldn’t put it out. It had to go in the bin.”

Dollin describes the partisan nature of football supporters as one of the media team’s biggest challenges.

“Football is an emotional game,” he added. “Our fans like us to win all the time which isn’t always possible. The big question for us is how do we engage our audience if the team is on a bad run of form? If you put something out there during those periods it can turn toxic very quickly.”

The big question for us is how do we engage our audience if the team is on a bad run of form?

Despite not having the rights to show live action from first-team matches, Arsenal can show match highlights and as-live recordings – once the other rights holders have exploited their own rights windows.

Importantly, the media team also creates bespoke behind-the-scenes video content before and after matches and from the training ground and press conferences, among others things, for web and social channels.

There is clearly a thirst for it, especially at a club of Arsenal’s size, where, on Facebook alone, it has 38m followers.

So Dollin is also looking further afield, having tested virtual reality (VR) and made plans for augmented reality (AR) applications for Arsenal fans around the world.

“The main issue with 360-video is that you cannot zoom-in on the cameras,” he said.

“If a goal is scored at one end of the pitch, and the camera is at the other end, you don’t see very much. The quality of the video isn’t that great either. It’s probably more interesting when the action is within 10 feet of the camera so perhaps it could be used in the dugout? Then the challenge is to link the VR story to what is happening on the pitch.”

Dollin admitted that VR is “not really for us at the moment”, calling the tests an “interesting experiment.”

Perhaps more pertinent for Arsenal, in an effort to engage its vast overseas supporter base, those that will possibly never set foot inside the Emirates Stadium, is AR, he said.

“We have an AR project ongoing at the moment that will give us the ability to take our players and put them anywhere in the world so that fans can get digital pictures with them. That is a really interesting one for us. ”

The Football Production Summit took place on 14 March 2018 at the Stade de France in Paris.