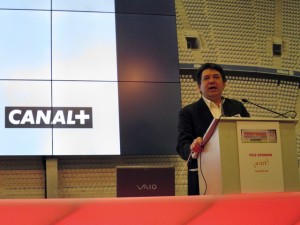 Top level football matches often are the realm of massive budgets and next-generation technologies, but Francois-Charles Bideaux, Canal+ Director of Sports Production, discussed how next-generation technologies can help stretch a budget for the wide range of lower-level football matches at the SVG Europe Football Production Summit on 22 March at Allianz Arena in Munich, Germany.

A new rights deal for a wide range of amateur French football (as well as national youth and women’s team matches and the French League Cup) gave Canal+ many matches that the channel wanted to put on air live. Previously Canal+ would deploy two or three cameras to the matches to shoot highlights. But shooting a full match with only two or three cameras was impossible.

“We needed a new technology so we worked with AMP, our technical provider, to implement a new workflow with new tools that could allow us to cover the matches live from whistle to whistle,” said Bideaux.

Bideaux said the issue facing Canal+ was that the traditional live sports production process where one task is completed on one machine by one person simply was not possible given the budget constraints for the amateur and secondary professional football matches. The trick was figuring out how to simplify the production and the amount of personnel and equipment required without lowering the standard.

“AMP built a new truck for this kind of production and it was customized around the Simply Live Vibox which has a touchscreen control where you can control the functions you need for a program like video mix, audio, replay, graphics, and building playlists,” says Bideaux.

The production makes use of six cameras, one handheld behind each goal and then four hard cameras along the side of the pitch located at each 16 metre line and then two at midfield: one shooting wide and one shooting tight. Those six cameras are connected to the Simply Live production system via HD-SDI and pass the live video and audio signals to the server whereby the director can use a 27-inch touchscreen with multiviewer to cut the show.

The Vibox is a one RU CPU with an internal RAID storage capacity of 15TB. It has seven inputs for cameras and can also be dynamically changed to have two, three, or four outputs (more outputs equal less inputs). Embedded audio support goes up to 16 tracks per video channel and there is also a 12-bus digital audio mixer with inserts, full dynamic processing, six-band parametric or 31-band graphic EQ. Format support includes 1080i and 720p at 50 or 60 fps and even 1080p at 24 fps.

The result is that Canal+ could cut the size of the production team from 29 down to 12: six cameramen, the director, two engineers who handle video, replays, and graphics, a sound assistant for sound and intercoms, an assistant on the pitch, and then the anchor.

“This is not about production at a lower standard but rather simplifying the production,” said Bideaux. For example, there is no pre-, halftime, or post-game show; just the live production with an on-site reporter and the announcers calling it off tube from the Canal+ broadcast facility in Paris.

“We were able to cut our budget by 50%,” said Bideaux. “The only issue is each person must now do two or three jobs. But we took directors who are at ease with the IT environment and in two hours they were able to direct the match with the system.”

And the system has already found widespread use by Canal+. It has been used for 38 matches (one per day), the final round of the U17 and U19 championship, secondary matches of the French League Cup, and women French national team friendly matches. Plans call for it to be used on basketball, boxing and for field events on the Diamond League.