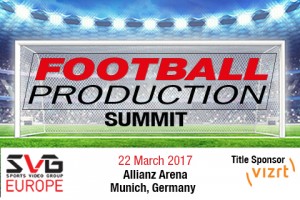 SVG Europe is very pleased to announce that the programme for Football Production Summit at the Allianz Arena Munich on Wednesday March 22 has been completed. A packed agenda will include production case studies from Belgium, England, France, Germany and Wales along with a look at Next Generation Audio, a conversation with federations, leagues and rights holders plus a discussion with rapidly emerging live sports media player Facebook.

Next up is a case study: ‘FC Bayern Munich and Allianz Arena Get Connected’. We are pleased to announce that Reinhard Penzel, Live Production, Managing Director will chair this case study session, along with presenters Daniel Dengl, Perform Media Deutschland, Senior Key Account Manager and Benjamin Steen, Bayern Munich, Head of Digital Projects.

Another case study titled ‘The Premier League Archive’ follows. With the rebrand at the start of this season and a new contract term for broadcasters, the Premier League commissioned its production partner at IMG to create a ‘One Portal’ platform for global broadcasters to access match information, news content and the back catalogue of match footage and programming from the archive. IMG ported 500TB of broadcast quality match footage to a cloud-hosted instance of the Imagen Enterprise Video Platform. Telling the story of this massive archiving undertaking will be Tom Barnes, IMG, Vice President, Sports Video Archive and Tom Blake, Imagen, Chief Executive Officer.

Following a break for networking and coffee we head to France for another case study, ‘New Workflows for Cost-Effective Football Production’. Taking us through the new workflows for Federation Française de Football and French League Cup will be Francois-Charles Bideaux, Canal+ Director of Sports Production.

Blackmagic Design is sponsor for our session titled ‘Facebook and Football: New Live Combination’. Facebook Strategic Partner Manager Sports Ronan Joyce will speak to SVG’s Ken Kerschbaumer about how the platform is working with the sports industry to help make the most out of Facebook and Instagram.