Speaking at SVG Europe’s Football Production Summit at Stade De France this week, UEFA spoke about its trial last year for remote uncompressed 4K during the 2017 UEFA European Under-21 Championship Final in Poland. The trial ran from the Krakow match between Germany and Spain, and BT Sport in Stratford, UK. It won the SVG Europe Technical Achievement Award 2017, announced at IBC, thanks to the success of the remote production, carried out by BT Sport and a plethora of technical partners, in preparation for Euro 2020. 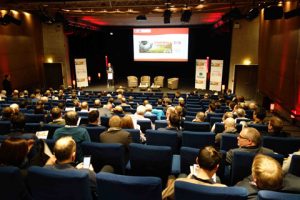 Phil Williams, senior additional programming manager at UEFA, commented: “With Euro 2020 on the horizon we felt it was expedient of us to look into the possibilities of remote production,” he said, referring to the issues in covering so many matches in locations stretched across the continent. “Managing production of the game in Krakow from BT Sport in Stratford was pretty much putting it to the test.”

Explaining how multiple networks were utilised to create the connection from Poland back to the UK, Nicolas Deal, TV transmission manager at UEFA, said: “We had to connect the stadium and London with different providers, but we had to take advantage of the way these networks are built in order to do this. Language is always an issue, especially technical language, but we made it work and had a lot of help from the other vendors.” 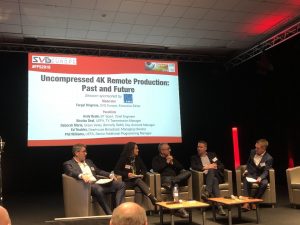 Speaking of the lack of latency, which ran at 33 milliseconds, and the quality of the resultant feeds, Williams said: “I can’t believe the game was that far away. It was like we were outside the stadium in a truck.  To say there was no latency, well, there hardly was,” stated Williams. “From an end user point of view, it was a great success.”

Talking of the tech set up, Deborah Maria, key account manager at Grass Valley, noted: “The consensus was that most of the equipment would be at BT Sport in Stratford. We used a PTP switch in Krakow and one in London; we had lots of meetings about this. We also used AES67 as audio needed a dedicated feed.”

Andy Beale, chief engineer at BT Sport, said there was very little for BT Sport’s production team to do once the feeds hit the UK end of the system: “If I remember correctly we just handed the feeds over to UEFA with no major changes. None of the production team arrived until their call time, midday on the day of the game, just like a normal game.”

Williams added: “We didn’t want to push the boat out too much [on production]. We wanted it to be as similar as possible to a normal game where we wouldn’t have a week to prepare.”

Concluding, Williams commented: “One of the major objectives we have at UEFA in terms of TV production is to make the broadcaster shine, to make it work in terms of budget and logistics.”

For Euro 2020, UEFA will look to “offer our broadcasters a complete suite of unilateral services, with both traditional and remote production options,” a spokesperson for UEFA added.