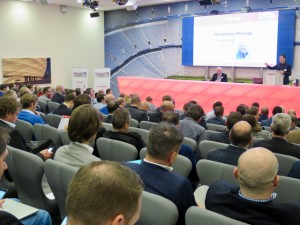 At the 2017 UEFA Champions League Final that will kick off at Cardiff‘s National Stadium of Wales on June 3, several major production innovations are due to be put to the test. These were the subject of an illuminating session at SVG Europe’s recent Football Production Summit featuring UEFA Senior Manager TV Operations and preceded by an introduction from Christian Plitt of session sponsor Quantum.

“We will make HDR tests available in the showcase area,” said Markus Hövel, UEFA, Senior Manager TV Operations, although on this occasion only provide HD and 4K feeds will be distributed. “We are [accommodating] several production units in HD. 4K is a joint production between UEFA and BT with a different truck, This year we will still play it safe but at the next World Cup we will have a one container solution with three feeds in HD, HDR and 4K.”

At the venue in Cardiff, the UEFA Senior Manager is expecting about 1,600 TV staff members as well as 75 broadcasters who are coming with their own trucks for three or four days. “We need to make sure that they get all facilities they have requested. This is why we need so much TV compound space.”

The big challenge is to prepare the stadium for TV and the hospitality areas when it is handed over to UEFA by the local organiser comittee only seven to ten days before the event starts. “Our host broadcast partner BT Sport [in Cardiff] starts about 8, 9 days before kick off installing everything together with us.“ They have also signed a new contract, together with BT Sport, for the next Champions League cycle of 2018 – 21.

The 2017 UEFA Champions League Final will have five tribune presentation platforms and three indoor studios. The event will be equipped with 42 HD cameras for the multilaterial feed. “The special circumstances in Cardiff are that the main camera platform is opposite the main stands of the benches and opposite the VIP seating,” says Hövel. “For the opening ceremony we have to install more cameras on the reverse side.”

In addition to the 42 HD cameras, there will be 22 cameras that can shoot in 4K. While 12 cameras will be used all the time for 4K footage, the other cameras will be upconverted. “We won‘t use all cameras for the match coverage.” Besides 8- 10 match cameras, there will be external shots with helicopters, replays, and half- and full-time presentations.

“The clubs are cooperative when we add more cameras,” said Hövel. “We are allowed to have a VR camera in front of the dressing room. The multilateral content will also be embedded into a 360 environmental. In total, there will be 135 streaming hours, [and] we will provide near-live clips to our broadcast partners.“

UEFA will set up a showcase area for broadcasters and suppliers in Cardiff so that they can discuss latest technologies. And for the first time, all broadcasters will come with their own SNGs: “We will offer them power, precabling and fibre connections,” he said.

SVG Europe will be reporting live from the Champions League Final, so look out for extended on-site coverage in early June.