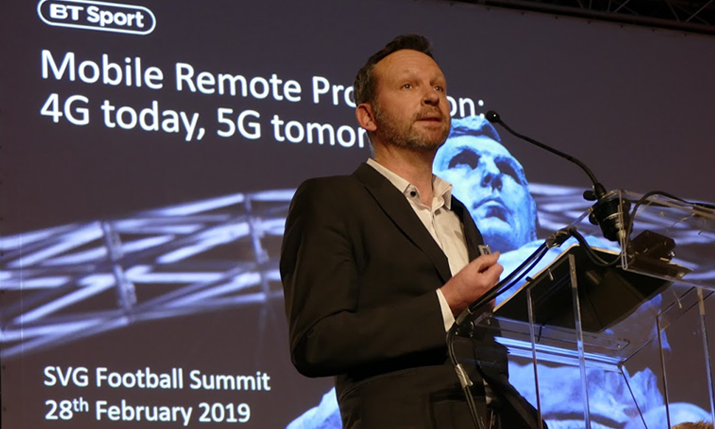 In a world first last year, BT Sport and EE successfully carried out a live broadcast over 5G using remote production, delivering a two-way transmission from Wembley Stadium to London ExCeL. The demonstration, which was the focus of a session at SVG Europe’s Football Summit 2019, was designed to illustrate the potential opportunities that 5G can bring to sports broadcasters.

5G for remote production was the hot topic for Jamie Hindhaugh, BT Sport’s chief operating officer and Andy Beale, BT Sport’s chief engineer, both of whom explained how mobile networks are set to disrupt sports broadcasting for good.

“If anyone in this room is looking at going down the remote production route because it saves you money, that’s the wrong way to be going.”

In the session titled, ‘Taking them all on: How 5G will simplify remote football production’, Hindhaugh discussed the inspiration behind BT Sport’s world first live broadcast over 5G using a remote production.

He said: “Why is it of interest? Remote production is quite a contentious subject, especially in the UK where you haven’t got millions of miles to travel. Why we’re interested in to comes down to four things: the first thing is the creative opportunity; the second thing is about the environmental footprint, as I think it’s really important to look at how what we do impacts the environment; the third is staff well-being; and the fourth thing is financial.”

Hindhaugh went on to dispel the notion that remote production over 5G is simply about saving on costs, however: “What I would say now is if anyone in this room is looking at going down the remote production route because it saves you money, that’s the wrong way to be going… it does save you a little bit, but that’s not the key driver in this. 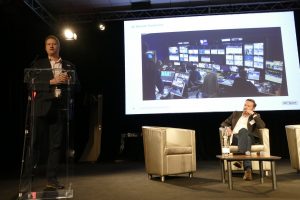 “The key driver is around the fact that you can do things in a very, very different way. You can let the cameraman go; you can untether them, so therefore you end up in this world where you can travel down on the bus with the team, you can go into the dressing room, you can walk out the tunnel, all live, no rig and RF points etc. It’s those sort of things, where you give the tools to people like Gemma [Knight, BT Sport junior director]… to actually do things differently; you’re not fixed anymore.”

The advanced technology of a 5G network compared to a 4G network provides the reduced latency that sports broadcasters need in order to have free reign with live productions, stated Hindhaugh. “Reduced latency is absolutely critical and this is where 5G, for me, is so, so exciting,” he explained. “We do quite a lot of remote broadcasts over 4G, and we obviously do that at grounds where there’s about three people, to make sure we can get the pictures back, but what 5G does is it starts giving you that protection,” he noted, referring to data congestion on 4G networks that can cause broadcast quality to reduce, or even fail.

He added: “The best way to describe 5G is that it’s like virtual fibre, so finally you’re not reliant on having to have that cable in the ground; you’re not reliant on having to have satellite. 5G will really unlock all of that. And why did we look at it? I’ll be blunt; EE, part of BT, is rolling out 5G across 16 cities in the UK over the next year [and that will be doubled next year], so 5G is coming. It really is going to make things very different for us.”

Hindhaugh concluded: “5G is really critical. 4G is really helpful for helping us to learn. So for instance this weekend [2 and 3 March] we’ve got a traditional OB at Solihull, we’ve got four other games going on in the national league, and we’ll be bringing you live goals, live moments into that truck in Solihull, all over 4G. So all of a sudden you’re costs are coming down, so you start looking at how you’re liberating content and how you’re getting it to support your OB to get the best you can, which is what we all do; make the best experience for our audience.”
Showcasing capabilities

The pair went on to introduce last November’s successful live broadcast over 5G using remote production, delivering a two-way transmission from Wembley Stadium to London’s ExCeL exhibition centre. Showcasing the capabilities of 5G technology for the world of sports broadcasting, Hindhaugh, alongside BT Sport presenter Abi Stephens, spoke live over 5G from ExCel in East London to BT Sport’s Matt Stagg, director of mobile strategy and lead of EE strategy for delivering 4G and 5G networks for the media and broadcast industries, who was at Wembley with Matt Smith, BT Sport presenter. All production for the live transmission was carried out remotely at BT Sport’s base in Stratford, East London. 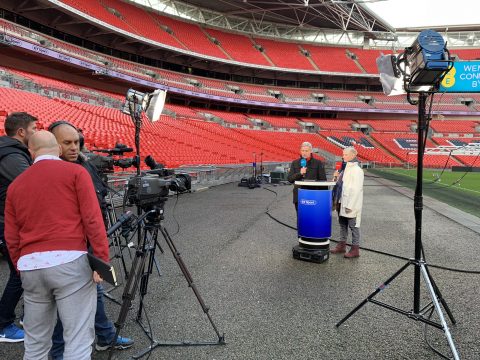 The transmission used EE’s 5G test network in the stadium, plus a first-generation 5G encoded dongle from Huawei. The test network used EE’s 3.4GHz spectrum from its 5G antenna in the stadium, connected to a 10Gbps backhaul link. With a throughput of 75MBps at Wembley, feeds from three cameras at 25MBps each were relayed through the Huawei 5G encoder to the 5G cell in the stadium. From there the transmission passed onto the EE backhaul network, and then to the internet.

In the afternoon at Wembley, members of the press were able to experience remotely produced live broadcast themselves, alongside Smith. In addition, the FA-recognised EE Wembley Cup, which kicked off on the weekend following the showcase, [25 November] became the first sporting event broadcast live using BT Sport and EE’s 5G remote production. The event, featuring YouTube’s biggest footballers alongside international football legends, was delivered over EE’s 5G network live from Wembley Stadium and was then shown live on the channel of YouTube star Spencer Owen. 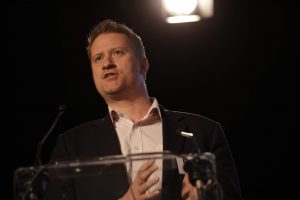 Beale commented on how 5G will make life easier for sports broadcasters: “We’ve done quite a few 4G remote productions, maybe half a dozen from the national league and women’s super league, but what we found in reality was even with well-matured 4G LTE networks now into some pretty good areas, really we were maxing out at around four or five cameras, and that was really the limitation. That’s great for some productions; we can actually do quite a lot on that because of the agility that Jamie mentioned; the ability to move these cameras about so much more fluidly to get over so much more ground, means you can actually create an experience where the viewer doesn’t even notice that there are only four or five cameras. It seems much more like a 10 or 11 camera game. But nevertheless, for people like Gemma [Knight] who are pushing the envelope from a production and directing perspective, they want to do more. So we started looking at how 5G would help us to do this.”

He added that there is an important difference between 4G and 5G: “It’s not just about latency and bandwidth, though those are two really important criteria… but actually it’s all about service management. The problem with LTE is… when LTE was conceived and standardised, no one thought we’d ever be consuming anywhere near as much data as we are right now, so no real thought was given to how we can protect certain services on the data network. So the problem we have is in a [football] ground, we’re competing with all the people that are in the ground doing social media, doing chat, doing everything that’s going on and there’s no way to protect that.

“The difference with 5G is that from a standardisation perspective, from quite early on we were looking at all the different use cases that would underpin the need for 5G data throughout, and making sure we designed in those guarantees,” Beale explained.

Beale went onto explain the network slicing capabilities of 5G, a technology that allows slices of 5G bandwidth to be used to create specific broadcast-grade dedicated networks for clients, providing the guaranteed latency, bandwidth and quality required for live broadcast, without competing against other network use.

He added: “What’s really exciting is it can be designed to be turned on an ad-hoc basis; it doesn’t need to be permanently nailed up, it doesn’t need to be permanently consuming bandwidth on the network. People can on a per hour or per minute basis, when this is built in the next 24 months, buy slices of 5G network with the bandwidth and flexibility they need for the time period they need to deliver these productions. And that’s why we’re very, very excited about 5G,” Beale concluded.

Football Summit 2019, sponsored by EVS, took place at the Stade de France in Paris on 28 February 2019