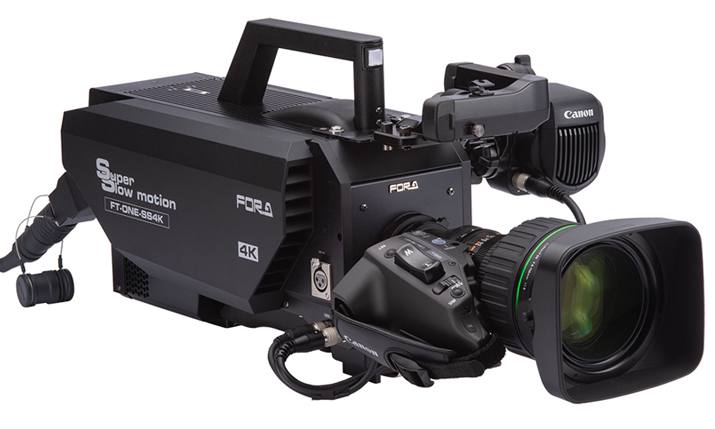 In lieu of this year’s NAB, For-A has spoken to SVG Europe about two key technologies that are already being used in sports broadcasting, which it would have been presenting this month in Las Vegas.

For-A’s FT-ONE-SS4K cameras, several of which were used for critical ultra slo mo replays during the live broadcast of the 2019 Champions League final in Madrid as well as other high profile live sports event across the world last year, have a key feature; the ability to detect light; when equipped with a B4 bayonet lens, the camera shoots footage up to four times brighter than models with a PL lens.

General manager at For-A, Peter Hattan told SVG Europe: “With ultra slow motion cameras, the biggest issue is light, but this [camera] is very light sensitive. This means we can shoot at very low light conditions.”

He added: “In typical floodlit lighting conditions [such as on a football pitch at night] you can get flicker but this camera also has an anti-flicker feature to help.”

Plus, the FT-ONE-SS4K shoots up to 1,000fps in 4K, offers simultaneous record and playback with internal memory, and features independent real time 4K or HD output. Other features include 24-axis colour correction and compatibility with Canon’s OLED viewfinder.

Additionally, because this records to the camera head if desired, users do not need a separate slow motion servicer, “which makes it a very cost effective proposition,” noted Hattan.

Another product useful for sports broadcasting is the FA-9600 multi-purpose signal processor, which was featured at the Rugby World Cup 2019. It was set to be used again by premiere broadcasters at the 2020 Olympics.

Said Hattan on the uses of the FA-9600: “One of the big issues sports broadcasters have today is with multiple different cameras from multiple different manufacturers, and they need to match all of these into their productions. You have to convert them all so they all look correct on the output.

“At the other end of the production chain is you might be doing a simulcast; you might have your main broadcast feed in 4K and the international feed for affiliates in HD. [However] in your [FA-9600] processor you can process a 4K UHD channel and at the same time from the processor take broadcast HD down-converted output from the same video signal, so it means you don’t need to do everything on a separate product,” he concluded.