Scheduled for release to Forscene customers on 29 March 2016, the new functionality provides the ability to autosync multiple source material in Forscene as well as to easily satisfy current and impending U.S. closed caption regulations.

Forscene’s new autosync tool makes it easy for users to create synced, multi-track sequences irrespective of whether the source footage has synced timecode – or even any timecode at all. Editors can create sync maps for numerous video and/or audio sources in Forscene using either the original time code or by assigning an auxiliary timecode to the source, and then edit from a multi-track sequence or a multicam clip. As well as simplifying the sync-mapping process, this development significantly reduces media storage requirements during post-production. Because Forscene proxies are created directly from the camera source, the post house doesn’t need to store the original media during the rough cut, and only high-res source for shots included in the cut-down sequence needs to be ingested for finishing at the post-house. 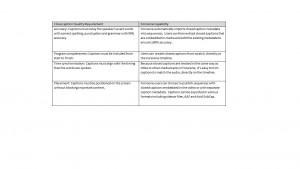 The FCC and CVAA deadlines for closed captioning video content extend beyond just the requirement for T.V. and online programming to include captions. The FCC has set strict quality standards for television captioning, which sets the precedent for online video captioning as a whole. Forscene’s newly improved closed caption tool allows users to ingest, create, edit and publish captions just like a video or audio track on the timeline – making it easier for clients to ensure that their content complies to the standards.

Jason Cowan, business development director at Forbidden, comments: “Forscene is constantly evolving to meet the changing needs of the industry. The software speeds up workflows by making post-production easy, creative and cost-efficient and we’re looking forward to demonstrating how these new features do exactly that at NAB.”