Last week the next generation Formula E car was revealed on the FIA stand at the Geneva Motor Show, ushering in a new era for the ABB FIA Formula E Championship. 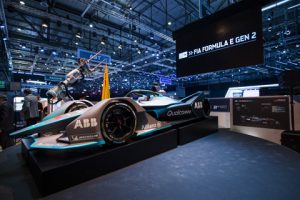 Technical specifications of the vehicle were disclosed, with the new car for the 2018/19 season highlighting vast improvements, as well as a focus on increasing fan engagement.

Enhancing fan engagement, integrated as part of the chassis is the new Halo head protection device (part of FIA’s new health and safety regulations to protect drivers), along with an innovative strip of LED lighting that Formula E has added.

The lighting system concept will enable fans to better follow the strategy of their favourite team or driver, indicating things such as different power modes and other race-related information, Renato Bisignani, director of communications at Formula E, told SVG Europe. 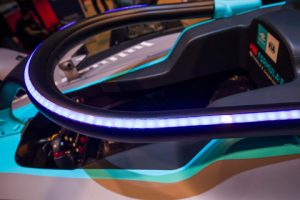 More details on how the Halo LED lighting will enhance the viewer’s experience will be revealed ahead of the start of season five, but Bisignani commented: “As soon as the FIA safety Halo device became mandatory we immediately asked ourselves, “what can we do to make Halo more interesting for fans?”. The strip of LEDs was both a simple and clever idea with different colours to show the different power modes the car is running in. We’re not afraid of experimenting and what we’ve done with Halo is one example of what makes Formula E different from the more traditional sports.”

Since the inaugural E-Prix only four years ago, Formula E has moved ahead quickly and now boasts a young fan majority. Bisignani said: “Fan engagement has always been a key focus for Formula E since the beginning of the Championship. We want to help fans feel as close as possible to the sport. We have an ‘always-on’ digital strategy and part of our success is down to our tone of voice; we really speak the language of Millennials and have a very strong content offering to drive engagement.

“We are the next generation motor sport promoting new electric technology, and we have seen over the past four years how we’re capturing a new, younger audience; Generation Z,” he continued. “The 13 to 24 year old bracket makes up around 45% fan engagement of our online content, and these two groups of 13 to 17 year olds and 18 to 24 year olds have seen the biggest rise and growth since we began the Championship.”

Driving that younger age group towards Formula E is its approach to blending realities, live and real life with virtual and non-linear. When the Championship launched, it kicked off FanBoost, an online voting system where fans can vote for their favourite driver to race at an event. The top three drivers with the most votes receive a ‘power boost’ that they can use within the race wherever they need it, for overtaking to getting round a corner faster. “Drivers embrace the spirit of this aspect of the championship and FanBoost is a good engagement tool for the fans, driving the proximity between fans, drivers and Formula E,” said Bisignani. 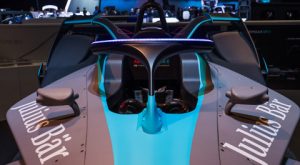 Formula E also uses telemetry to bring fans into the moment, using vehicle telemetry since the Championships began and this year, human telemetry is being trialled for both drivers and pit crews, providing fans with details such as heart beats per minute over the official TV broadcast and Formula E app, so they can literally see how aspects of the races affect their favourites.

Formula E also has a partnership with EA and its gaming app, Real Racing 3, which has had over 300 million downloads. Live at its racing events fans attending in the E-Village are able to go to the Gaming Zone, where they have the chance to prove their racing skills for the fastest lap. The four fastest fans are then pitted against the four fastest drivers live at the event for an e-sport competition. This is streamed live on the Real Racing 3 app and Formula E social channels generating a lot of interest amongst fans, and can also be watched after the event.

Compared to a straight e-sports strategy, Bisignani said this live, trackside gaming event is preferable for Formula E. He comments: “There are barriers to entry in e-sports, such as monitors, simulators and steering wheels. Within motorsports E-sports is still attractive to quite a niche group because of those barriers, so we prefer to go down this mass market route, mixing the two worlds to generate greater discoverability of our product and more accessibility for fans.”

As for the next generation Formula E car, the most notable technical change comes underneath the bodywork with the battery, doubling the range of the car with almost twice the energy storage capacity available so there will no longer be the need for a mid-race car change.

Alongside the improved longevity, the maximum power output of the car has increased to 250kW, an increase of 50kW that will see the potential top speed of Formula E reach 280 kmph (174 mph).

The new model will compete over the coming three seasons, starting with season five in late 2018.