Formula E gets off to electric start 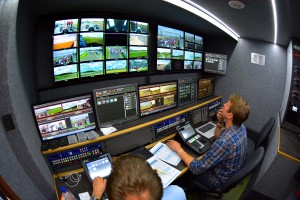 The first ever ePrix race in Beijing was somewhat overshadowed by a collision in the final lap that sent Nick Heidfeld’s electric race car leaping spectacularly onto a barrier, after Nicolas Prost veered into him. Fortunately, there were no injuries. However, it was a big bang for the quietest of motor races, as Formula E, the FIA’s new all-electric single-seater championship, takes to city streets at speeds in excess of 225kph (150mph) across the world this year, forsaking the noisy combustion engine for greener, cleaner energy.

That same environmental commitment was also part of the strategy for creating the multiple pods used to broadcast the events, and posed a challenge for British systems integrator FAL Systems, which was commissioned to build the system by Hayfisher Productions, which in turn was contracted by Aurora Media to provide broadcast facilities for the championship. Race coverage is organised in a similar way to Formula 1, with Formula E being its own host broadcaster, working with Aurora Media.

“Key considerations were that Formula E promotes a new, cleaner, environmentally friendly form of racing and also the fact that this is a worldwide series with races being held in nine countries across four continents. This shaped our thinking in the design stage and led us to focus on elements such as an extremely compact design with as low a weight as possible whilst still enabling provision of a state-of-the-art broadcast centre. Our solution was a complete package built into four pods over a 12 week period at our facilities in Leeds,” said Andy Unsworth, FAL’s technical director.

In fact, besides the production pods (audio; RF and racks; replay; and engineering), there are a further three pods for transporting cameras and cables, plus monitors and other equipment for the production tent.

The fly-away/rail-away/sail-away pods are designed for inter-modal transport use, which means they had to be small, and light enough to be transported using whichever mode proved most environmentally and time friendly. “They have to be transported in the most green, efficient way possible,” said Chris Warden, MD. 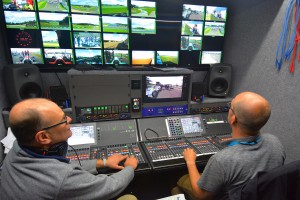 “We ended up with a slightly smaller pod than we’d anticipated,” added Unsworth. They have tried to provide a truck-like operational space in each of the 2.5×2 metre production pods. Reducing weight to a minimum was a key factor, but this had to be balanced with providing maximum flexibility and future proofing — elements that often ran counter to each other. However, each of the technical pods eventually came in at 50% below the maximum weight allowed. Careful choice of equipment has also enabled FAL to keep the power requirements as low as possible, using energy-saving devices wherever possible.

“The biggest challenge of the whole thing was doing it in three months. It was tight,” said Warden. “Also, as rail is very bad for high-frequency vibration, we’ve had to shock-mount all of the equipment. All of the racks are on floating mounts,” added Unsworth.

The system is wired for 14 Grass Valley HD camera channels, although there are currently 13 LDK-80 Flex cameras (“a really high quality camera within our budget,” said Unsworth), run over SMPTE fibre, with the intention of adding a Super-SloMo camera as budgets allow.

There will also be up to four in-car cameras in each of the 20 cars — 40 of these cameras were in place for the first race and 80 will be in use eventually, although there are only four (selectable) feeds from them to the mixing desk.

Vislink is supplying both the in-car cameras and links, taking a single channel from each car, with data and telemetry information (with remote switching between the cameras). It is using a diversity fibre-based receive system, with up to eight nodes, depending on the track. All of the racing is taking place on short, city circuits (up to about 3km in length).

There are also four of the new Marshall miniature cameras used locked off, plus two RF (Panasonic P2) camcorders for pit reporters and ENG use, again using Vislink systems, which can have up to 12 receive points.

It is using a 72×72 Clear-Com talkback system, which FAL had never used before, “but it turned out to be a good choice, as the company handling the race communications is using a Clear-Com system, so it helps with the integration,” said Unsworth.

Its production systems are based around a customised Miranda (now Grass Valley) NV8280 hybrid router, which includes all audio embedding/de-embedding and all video routing, “to save space, weight and cost,” he explained.

FAL looked at Snell and Evertz, “but only the Miranda ticked all the boxes.” It also chose Miranda Kaleido multiviewers, “which integrated with the router and control system and gave us a really simple solution,” said Unsworth.

“One of the key things about this job is that they are being shipped around the world, and as Formula E is trying to promote green racing, power and weight were major considerations. By keeping all the audio embedded, we weren’t using extra copper between the pods. It was a really neat solution,” he added.

FAL also selected two Yamaha CL5 audio consoles with Dante capability. “Primarily because they fitted what we needed to do within the budget, but they actually gave us a lot more than we needed. We ended up with two very powerful mixing consoles.”

It also has an extensive audio distribution network, with four Focusrite RedNet 6 MADI to Dante bridges providing 512 audio paths. Yamaha Rio stage boxes form the analogue audio interface. For replay it has three K2 Dyno servers, each with 6-inputs and two outputs. “The Dynos are running over the network, so they can share the media between machines, which future proofs us,” said Unsworth. “It was a cost-effective solution that fitted the client’s requirements,” added Warden. Miranda’s Densité modular range was chosen for distribution and format conversion.

The merger of Miranda and Grass Valley happened just after FAL had made it’s initial choices, “but has made things easier,” said Unsworth.

It also uses a Grass Valley Karrera software based video production centre for vision mixing, chosen because it uses up to 50% less power than some alternatives, and the merger has meant that it could be integrated with the router control system, “to give a very powerful, but simple to operate, system.”

Belden, which owns Grass Valley, also supplied all of the fibre cable for the installation and cameras, which amounted to 70 300m drums.

“The support is very good as well,” added Warden. Grass Valley sent two technicians to support the event in Beijing, and also sent people to the two full pre-race simulations carried out at Donnington Park, in the UK. Grass Valley “wanted to make sure that if there were any implications in transit to China there was someone there to support it.”

As the system doesn’t return to the UK until April for the European legs, “we needed to know we could get support for all of the kit in all of the countries we are going to,” said Unsworth.

The 25-lap battery-powered race in Beijing was held in the Olympic Park, on a course winding between the Water Cube and the Bird’s Nest stadium built for the 2008 Games.

The next round in the 10-race series will take place in Putrajaya, on Malaysia’s west coast, on 22 November. The series will come to Europe next May, with races in Monaco (9 May) and Berlin (30 May), with the concluding race in London’s Battersea Park on 27 June.